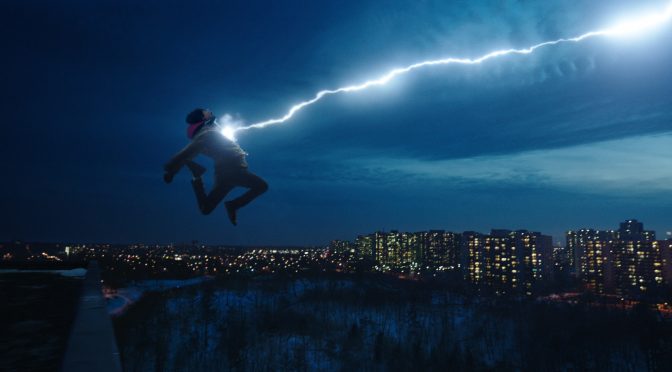 Based on DC Comics’ character, Shazam! is a free-wheeling, fun-filled epic about a kid who wants to find his mother but finds a family instead.

Shazam! Opens with a different boy – Thaddeus Sivana (Ethan Pugiotto) – a boy bullied by his brother and told by his father he would never be good enough.

Young Thad finds himself, in a middle of a long drive with his dad and brother, transported to a cave in which he meets the wizard Shazam – who offers him the wizard’s powers if he can pass a simple test.

The test is to resist the temptations of the Seven Deadly Sins – trapped in gargoyle form along the walls of the cave. He fails and will spend decades trying to find the cave again.

When we meet Billy Batson (Asher Angel), the 14-year old is stealing a police car to travel to the home of a woman he believes might be his mother. She’s not. And Billy is caught.

Since he and his mother were separated at a fair when he was four, he’s been trying to find her – bouncing from foster home to foster home as he kept running off in search of her.

The Vasquez home is his last chance.

Victor and Rosa Vasquez (Cooper Andrews, Marta Milans) are a warm couple and their foster kids have formed a real family – but Billy wants none of that.

Then, after showing his good side defending his new foster brother Freddy Freeman (Jack Dylan Grazer) – and being chased by Freddy’s tormentors – he chased a subway and is shortly thereafter in the wizard’s cave.

The wizard’s power is transferred to Billy and ZAP! He’s in the body of a superhero (Zachary Levi).

What follows is a series of brilliantly done sight gags as superhero fan Freddy tries to help Billy figure out his new powers. (This sequence is even better than the sequence in the first Spider-man where Toby Maguire’s Peter Parker figures out his new abilities).

Meanwhile Dr. Sivana (Mark Strong) is successfully completing his research into certain symbols associated with opening the door to Shazam’s cave – and gaining power as the essences of the Seven Deadly Sins enter his body.

But he wants more – he wants the power of Shazam, First, though, he pays a visit to his father’s company, Sivana Industries, to exact a horrible revenge (seeing the Seven Deadly Sins in action might be a bit much for preschoolers).

Ironically, Sivana’s search for Billy won’t be a long one.

Kids being kids, Freddy has been posting videos of Billy’s efforts to learn his powers on YouTube. (D’OH!)

While the scenes with Billy learning his new powers are hilarious, things take a darker turn when Billy starts using his abilities for money – and leaves Freddy in the lurch as he skips school to find his mom.

At a key moment, Billy both causes an accident and then saves the potential victims – leading to a magnificent dressing down by Freddy.

For all its warmth and wit, Shazam! Isn’t afraid to get seriously dramatic. Freddy’s harsh reassessment of Billy; the long-awaited reunion of Billy and his mom, and more – are balanced beautifully by the film’s humor, wit and occasional horror (see Seven Deadly Sins).

In the end, Billy grows enough that his foster siblings become his family in a most unexpected way.

David F. Sandberg directs from a screenplay by Henry Gayden and really does a super job. He keeps the pace at the right levels; makes the transitions from humor to drama to horror smooth/seamless, and he brings his characters to vivid life.

Kudos to the CGI artists – for a much lower budget than the usual superhero epic, they provided some excellent (and occasionally disturbing) visual effects.

Zachary Levi and Asher Angel get full marks for providing a consistent, believable character whether as Billy or Billy/Shazam.

Jack Dylan Grazer, it should be noted, steals almost every scene he’s in. His Freddy is an open book – he might need a crutch to get around, but he’s the most truly free character in the film. His sense of wonder and delight at the world around him; and the wonderfulness of his family, are inspiring.

Another extremely cool thing about the film is a genuinely unexpected cameo that – along with an authorized Batarang replica and a bullet that actually bounced off Superman – firmly plants Shazam in the DC movie continuum.

Special note: Shazam! pulls an MCU (Marvel Cinematic Universe) on us – there are two post-credit scenes, both delightful.