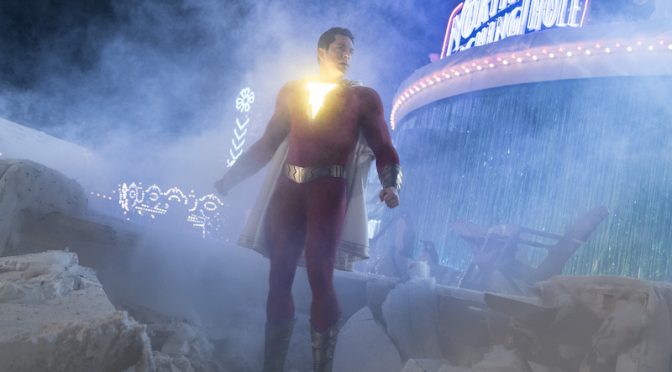 How do I say this? Shazam. Shazam! Or do I go Gomer Pyle style and say, Shazam!, Shazam, Shazam? These are the big questions of the Universe that keep me up at nights. No seriously. Anyhoo we’re here to talk about the state of the Super Hero movie world, namely the folks at the World of DC has a new crowd pleasure on their hands, Shazam. Unfortunately, once again I find myself not in the “in crowd,” as I did not like this movie.

DC has finally hit upon a revelation, after getting rid of Zach Snyder, the powers that be have finally discovered that not all their heroes need to be dark and gritty, that you can have moments of fun and levity in their Universe. The problem with Shazam is that all the comedic bits, at least the “best” ones are in the trailers, you take those moments away and I was left being surprised at how depressing and bland this movie actually is.

The movie starts off well and sets up everything from the beginning before completely throwing away its own rules and internal logic that I was never able to get past or let go. In the beginning we’re introduced to a little kid, Sivana who is picked on by his father played by John Glover .

The Wizard Shazam! (Djimon Hounsou ) spirits him away and tells the kid if he is pure of heart and pass his test of purity and can turn away from temptation he will gain all of the Wizards powers.  After spending years being told he’s not worthy by his father he jumps at the chance. Unfortunately, he fails the test.

Years later as a grown man he’s seeking out the deadly sins that told him to find them as a kid. I’m giving you this Tedious plot summary point because it goes to one of my main issues with the film. Apparently, hundreds of kids have gone through the same experience.

Young, street wise orphan Billy Batson (Asher Angel ) who has been on a quest to find his mother who lost him at a carnival when he was a few years old. Batson is not a very likeable kid he’s run away from numerous foster homes, not above steeling from convenience stores and from cop cars and he’s selfish, up until the point in the movie where he gets his powers he hasn’t displayed a single trait that would lead you to believe that he would be worthy of the power of Shazam!.

He somehow gets the old Wizards attention when he saves his new foster brother Freddy (Jack Dylan Grazer ) from getting beat up. Being old and having very little time left, Shazam just hands Billy his powers. He doesn’t have to pass any purity of hear test, which he surely would have failed, just hear you go. After the movie made it explicitly clear you had to be pure of heart The Wizard just says “here you go, have at it.”

The rest of the movie just becomes so one note and bland, redoing the same basic gag over and over and that gag is “Hey, I have Super Powers now, I want to learn how to use them and be kind of a selfish, but loveable douche along the way.” It’s hard to hate on the movie because it does have heart and wears it on its sleeve but none of that heart comes from the main character himself. It all comes from the foster family and those scenes are sweet, nice, respites from Shazam himself, unfortunately we don’t get enough of that.

I love Zachary Levi and in some respects think he was born to play this part. He exudes boyish charm and charisma but I thought the costume looked really cheesy and whenever he concentrated on using his powers he looked like he was taking a dump. The movie picks up a bit in the 3rd act when he finally does some super heroics but that wasn’t really done out of selflessness it was done because Savina threatened his foster family. The entire fight sequence was filmed all at night and seemed a bit paint by the numbers.

I’m struggling with this close. I didn’t hate Shazam! but I should have loved this movie and was disappointed that I didn’t. I feel like I need to see it again. But for now.