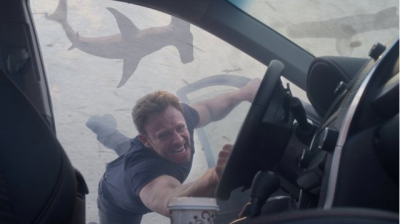 Everyone who can guess all the ridiculous cameos in Sharknado 3 gets a shiny penny. Is it ok for me to hate this because I was cut out of the crowd scene for my movie debut? Gah! Damn you Director Anthony C. Ferrante! I’m glad I didn’t have that Sharknado 3 party, or I’d feel like Kevin Costner must have when he first saw The Big Chill. Anyhoo, SyFy’s new summer tradition returns for another round of, nonsensical insanity. Is that even a thing? Sharknado 3 throws any pretense of being a serious movie out the window with the opening homage to Bond movies.

This time out we go from the single city destruction of Los Angeles, CA and New York City to taking on the entire eastern seaboard. The movie starts with Washington, DC being destroyed Independence Day style. Welcome to Earf! Luckily our hero Fin Shepard (Ian Ziering) is on hand to help President Mark Cuban (no, really…) take out some sharks with the American flag. God bless ‘Murica.

I love the idea that Fin has become a national hero and everyone actually appreciates what he did in LA and NYC. So often in these films, the hero is never acknowledge his good works in the past (I’m looking at you Die Hard).

Ferrante and his writing crew have built a world that somehow makes sense and adhere to its own internal logic, stuff that worked in the last two films work again here. There’s a fun sequence where they somehow magically know how to fly a fighter jet and use it to take out Sharks at a NASCAR race by shooting rockets into the eye of the tornado – excuse me sharknado.

As much as I like the Sharknado franchise, all the cameos are starting to ruin the fun of the film. I find myself spending half my time trying to figure out who all of these people are – some of the better ones included Jerry Springer, Chris Jericho, Lou Ferrigno, David Hasselhoff and a fun death by Frankie Muniz. I hated the cameos by all the Today show crew in Sharnado 2. They better get eaten this time out.

Sharknado 3 felt a bit like a reunion movie for fans of the first film as we find out what happened to Nova (Cassie Scerbo) who comes back as a bad ass – who at one point took out a bunch of sharks with a mascara shotgun (no, really, again. I’m serious – a mascara shotgun!) Nova helps Fin get back to his family who is stuck at Universal Studios, Orlando. Ryan Newman replaces Aubrey Peeples as Fin’s daughter Claudia and Tara Reid returns at Fin’s one armed pregnant wife.

Since I was there when they filmed, it’s pretty surreal watching how all of it eventually came together and as someone who loves Universal Orlando and from Washington, DC it’s weirdly cool watching both get destroyed. Shooting on location at Universal added to the “realism” of the film – as real as a low budget D movie can get. My issue with the effects was actually the rendering the sharks. This time out they looked too fake against the rest of the composite shots.

The one-liners in this film are just over the top and it’s comforting that they go for the obvious lines so often that it could become a drinking game. They go all in on the crazy, clichéd slow motion action movie shots. I desperately want to spoil the amazing, ridiculous ending, but SyFy expressly told us not to.

Now that we know what to expect from this franchise Sharknado 3 isn’t as fun as the original, but still worth one more trip on the crazy train. I desperately want to spoil the amazing, ridiculous ending, but SyFy expressly told us not to. But oh, my, god!