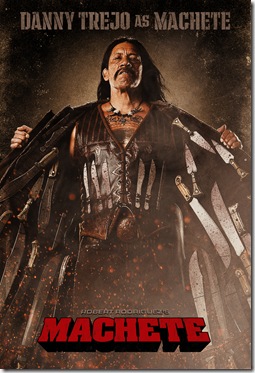 If you love exploitation flicks, there’s a very good chance you’ll revel in Machete. It’s got an iconic hero, gunfights, fist fights, sword fights, missiles, Gatling guns, some very impressive lo-riders, evil villains, hot women and more blood guts and veins in one’s teeth than any movie in recent memory – at least one that wasn’t a pointless horror/slasher flick with no plot.

From the Machete’s opening moments, in which the incorruptible title character’s refusal to take a less thorough approach to his job resulting in the death of his partner, his wife and daughter [the latter not actually seen onscreen], it’s apparent that Rodriguez has nailed the violence and surprising wit of the best of those old exploitation flicks.

Once he really gets going, we get a movie about the corrupt manipulators of politics who are plotting to put an end to illegals entering country from Mexico – not to actually keep them out, but to drive up the need for their cheap labor, but only through them. The men behind this plot include Mexican drug lord Torrez [Steven Segal], Texas senator McLaughlin [Robert DeNiro] and his executive aide, Booth [Jeff Fahey]. In their quest for profit, they enlist the aide of a “vigilante” named Stillman [Don Johnson] and a hitman named Osiris [Tom Savini].

Booth hires Machete to assassinate McLaughlin, but of that’s just a ruse. While someone else shoots the senator in the leg, Machete is supposed to take the blame. Unfortunately to paraphrase the tag from the original fake Machete trailer, this time they [messed] with the wrong Mexican [don’t worry, Rofriguex finds a way to get the original tag into the movie in a fresh and funny manner]. 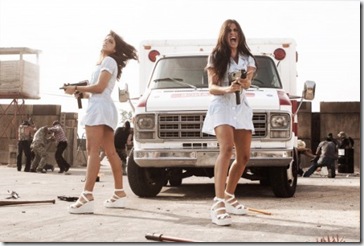 On the side of the angels, we have Luz [Michelle Rodriguez], Machete’s brother, Padre [Cheech Marin], and a couple of young Latinos named Julio [Daryl Sabara] and Jorge [Gilbert Trejo]. Machete [Danny Trejo] even persuades an ICE [Immigration] Agent [Jessica Alba] to join the cause.

Of course, where you have an over-the-top exploitation flick, there has to be sex to go with the violence. Here, the sex comes as part of Machete’s revenge on Booth and the senator – and involves June and April [Lindsay Lohan], Booth’s wife and daughter. There are other moments of nudity, too, including a moment with Alba in a shower…

If Arizona hadn’t enacted its current immigration law, Machete might have been a grade A blood and sex romp, but instead, the film has become a rather pointed reply to that law. Indeed, there are more than a few moments where Rodriguez allows polemic to take up a bit too much time and that does detract from Machete’s frenetic pacing and slashing wit.

Overall, though, Machete is good, dirty, bloody fun – and the stoic Trejo makes an effective iconic hero. If you don’t walk out of the theater afterward feeling exhilarated, then you just don’t get the spirit of a great exploitation flick.