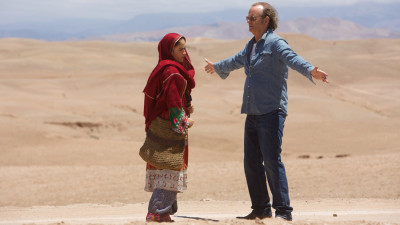 In Rock the Kasbah, two-bit talent agent Richie Lanz finds himself abandoned by his only client in Afghanistan before finding that one great talent that might just save his career – if not his life.

Despite being a very traditional seeming plot, Rock the Kasbah provides a few fresh riffs and lets Kate Hudson be very good for the first time in a long while.

Down on his luck talent agent Richie Lanz (Bill Murray) stumbles onto what he hopes will be a good gig for his one and only client, a talented but presence-free singer named Ronnie (Zooey Deschanel). The gig – a USO tour for the troops in Afghanistan.

Things do not go well and Lanz finds himself abandoned when Ronnie absconds with his cash and his passport – and the aid of a mercenary called Bombay Brian (Bruce Willis, sending himself up with wicked underplaying).

Broke and desperate, Richie falls in with a couple of loose cannon arms dealers (Danny McBride and Scott Caan) and is conned into makes an arms delivery to a small village several miles from Kabul – a journey in which he is helped by Afghan taxi driver Riza (Arian Moayed), who translates for him as well as being his personal driver in return for stories of Richie’s (totally made up) adventures as an agent.

Richie persuades Brian to help make the delivery but when a mine takes out Brian’s vehicle, he abandons the hapless agent.

While in the village, Richie has great good fortune to overhear one of the village girl’s, Salima (Leem Lubany), singing a Cat Stevens song in a cave (if she was discovered it could mean her life). He decides that she should compete on Afghan Star – an Afghan version of American Idol – but her father refuses to let her. So, being a dutiful daughter, she stows away in the trunk of Riza’s cab and makes a bid for creative freedom.

Meanwhile, Salima’s father, Tariq (Fahim Fazli) is in danger of being replaced as the village’s leader by a warlord – and Richie has made the acquaintance of a very gifted prostitute, Miss Merci (Kate Hudson), who is far more savvy than he about almost everything. 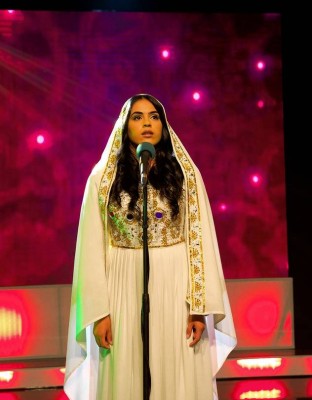 To be sure, Rock the Kasbah is a bit of a conglomeration of bits and pieces. Mitch Glazer’s script gives us the underdog in a competition; a hooker with a heart of tarnished gold; a mercenary who might once have been a real G.I. Joe, and a faithful sidekick.

He’s also given us some fun riffs (and some sobering ones) by setting what could have been just another story about overcoming great odds to succeed in a place where success is measured by surviving another day.

Murray, of course, could play Richie in his sleep – but he doesn’t. Willis takes Bombay Brian and makes him so dry that he makes John McClane look like a fount of youthful optimism. Hudson plays Merci as both intelligent and more than a little cunning – as well as unsurprisingly good-hearted.

One of the things that makes the story really come alive, though, is the way that Moayed takes a prototypical sidekick role and makes it sing (almost as well as Lubany – and she can really sing!). His timing is perfect – especially in sequences when he’s translating for Richie. He and Murray have a physical presence reminiscent of Laurel and Hardy or Abbot and Costello – physical opposites that complement each other.

The other major source of elevation beyond the average is Leem Lubany. She is darkly beautiful without being inappropriately sultry; projects a fierce determination, and sings like an angel. She also makes a good foil for Murray, which helps us buy some of his more idiotic decisions as noble rather than crazy.

Rock the Kasbah doesn’t exactly zip along but, thanks to director Barry Levinson’s deft touch, it never drags, either. Rather, it gives us the time to get to know the characters without feeling like it’s being overly expositional.

Plus, as with most of Levinson’s work, the music is brilliantly chosen – if occasionally a bit on the nose (Blind Faith’s Can’t Find My Way Home comes at one such moment but it’s such a brilliant song that it works anyway).

A statement at the end of the movie notes that it’s dedicated to the first woman to sing and dance on the real Afghan Star (watched by as many as eleven million Afghanis).