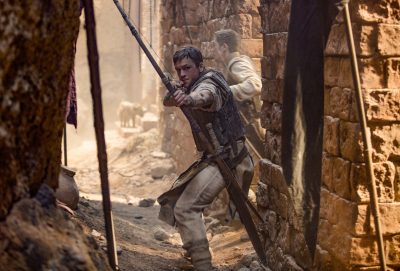 The IMDb blurb for Robin Hood reads, ‘A war-hardened Crusader and his Moorish commander mount an audacious revolt against the corrupt English crown in a thrilling action-adventure packed with gritty battlefield exploits, mind-blowing fight choreography, and a timeless romance.’ 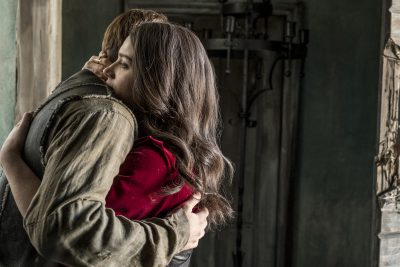 In some 12th-Century-ish period (‘I forget,’ claims Robin in the opening narration), Robin of Locksley (Taron Egerton, Kingsman: Secret Service, Eddie the Eagle) is conscripted by the Sheriff of Nottingham (not good King John – who wasn’t… good that is) to fight a Crusade in the Holy Land.

For attempting to save a Moor’s son, he is wounded by his commander Gisbourne (Paul Anderson, Peaky blinders) and sent home on a dank hospital ship. The Moor (Jamie Foxx, Ray, Baby Driver) stows away and, once Robin discovers his land has been claimed by the Sheriff (Ben Mendelsohn, Bloodline, Ready Player One), persuades him not to try to kill him.

He has an alternate blind that relies on Robin’s gaining the Sheriff’s trust. Also, Robin finds his name unpronounceable, so He gets to use the English translation – John. 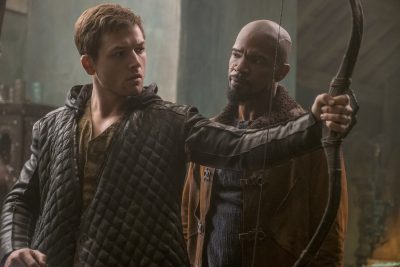 And did I mention the thief who steals Robin’s heart before he leaves for the Crusades?

Her name is Marian (Eve Hewson, The Knick) – and not only does she sound American, she has the fresh-scrubbed face of a wholesome shampoo model. And she’s now with Will (Jamie Dornan, The Fall) – she’d been told Robin died two years before.

As it happens, the Sheriff is responsible for raising funds to support the Crusade – which he does using very familiar fearmongering tactics. There’s also some question about where those funds are going – a questioned raised by the Sheriff’s meeting with The Cardinal (F. Murray Abraham, Homeland). 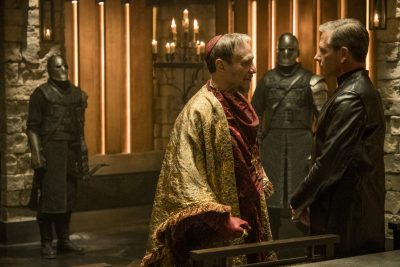 In any event, everyone’s pretty sick and tired of being taxed to death – which suits John’s plans well; he trains Robin to be a thief/ninja/fast draw bowman with the aim of stealing the money the Sheriff has collected.

Anachronisms about in Robin Hood – none more violently noticeable than the variations of machine gun-like crossbows used by both the Moors and the Sheriff’s men.

The language is modern colloquial English, and Marian is certainly a liberated woman (Will complains that she never listens to him). 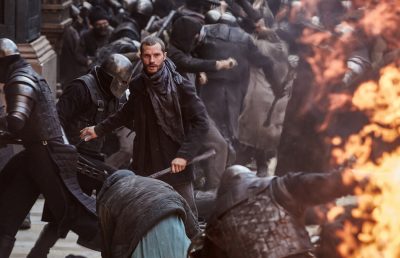 Then there are the sets – some look like Industrial Age; some look like their designers might have had the actual period somewhere in the back of his mind – and the costumes (the Sheriff in a grey duster!), and those unusual weapons.

Plus, the king is only mentioned once or twice – apparently the Sheriff has plans that don’t involve him…

The film skips between its various plot arcs with reckless abandon and there is a lot of very interesting action stuff – like Robin learning to fire arrows every second (and two or three at a time – how else can you fight machine gun-like crossbows, right?).

There’s a lot to like about Robin Hood – it’s fast-paced fun with a bit of wit, a bit of snark and a fair amount of charm.

It might not be art, but the audience I saw it with seemed to enjoy it as much as I did.