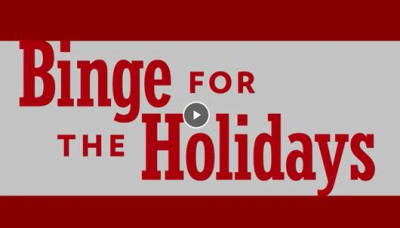 No! Not that kind of binge!

BBC America has gathered a veritable feast of movies and TV shows to gladden the hearts of most everyone – Movies That Sleigh; Sci-Fi Binge; Earth Binge; Darts Binge; A Few of Our Favorite Things; Doctor Who Christmas specials; and a Doctor Who Marathon.

Check out the trailer and a list of Binge for the Holidays programming below.

THERE’S NO PLACE LIKE BBC AMERICA FOR THE HOLIDAYS!

New York – November 20, 2018 – This December, join BBC AMERICA for a month-long celebration of our favorite shows and movies! Binge for the Holidays kicks off on Monday, December 3 with fan-favorite “Movies That Sleigh” followed by themed binges each week celebrating the best of Sci-Fi, Earth and A Few of Our Favorite Things, including 2018 breakout series Killing Eve. It all leads into a nine-day Doctor Who event starting on Christmas Eve with two days of back-to-back Christmas Specials, and culminates in the franchise’s first-ever New Year’s Day Special on January 1.

Plus, BBC AMERICA will be bringing back the Doctor Who Yule Log – all new for 2019 – in December on VOD, BBCAmerica.com and the app.

Come binge for the holidays on BBC AMERICA all month long – Yule love it!