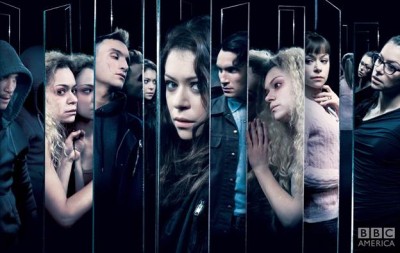 Orphan Black (BBC America, Saturdays, 9/8C) is pulling strands together in unexpected ways in season three’s eighth episode, Ruthless In Purpose, and Insidious In Method. Essentially, everyone plays everyone else this week, but though there’s nothing new about that the results are illuminating.

The story is picking up speed with three episodes to go until Orphan Black’s season three finale – unlikely encounters play out in unexpected ways, and we meet yet another clone, Crystal Goodrich.

First off, there’s Rachel’s refusal to translate the notations in that special copy of Island of Dr. Moreau for no one but Sarah. That leads to Scott (Josh Vokey) putting together an Impossible Missions Force style escape while Cosima plays Delphine (Evelyne Brochu).

Meanwhile, Donny is all up in a knot because Jason (Justin Chatwin) kissed Allison (well, Cosima pretending to be Allison) and not terribly keen on the idea of taking in two new boarders – Helena and Gracie (Zoé De Grand Maison). Donny (Kristian Bruun) and Jason have an encounter that goes pretty much as you might expect, but when Helena encounters Gracie again, it does not.

Crystal plays an important part in the episode because of Rachel’s latest requirement for translating the annotations in the special book – a sequence that lets us know that even stuck in a motorized wheelchair, Rachel is not to be underestimated. Delphine, on the other hand, gets to display an unexpected, Rachel-like level of cunning.

Other unexpected moments: Mrs. S (Maria Doyle Kennedy) getting caught off guard and Jordan Gavaris getting to use his regular voice – both giving a little extra depth to the proceedings. Dr. Nealon (Tom McCamus) also has some choice moments (this is not a medical man you want to piss off!), and Rudy (Ari Millen) turns out to get along with cats.

Ruthless In Purpose, and Insidious In Method is as complex an episode as we’ve seen in the series, weaving so many arcs together that it would be easy to lose track. As usual, Tatiana Maslany does a great jump playing five different characters, but Bruun and Vokey get some genuine standout moments, too.

Writers Graeme Manson and Chris Roberts may be dealing with seemingly dozens of arcs, but none of them feels underserved – and director Aaron Morton plays off the action beats with just enough intriguing angles that the ep never feels predictable and we never feel quite settled.

I guarantee the final sequence will give you the shivers.

After tonight we’re down to episodes left in the season and it looks like we’re on target for even more duplicity and revelation. I can’t wait to see what happens next.