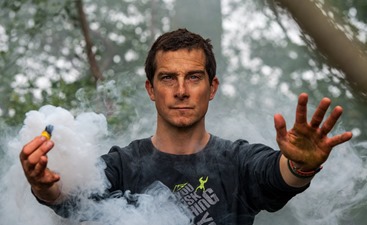 Running Wild with Bear Grylls will premiere on Monday, July 28th. For more details, check out the press release after the jump.

UNIVERSAL CITY, Calif. — June 19, 2014 — NBC has ordered six episodes of the hour-long alternative series “Running Wild with Bear Grylls,” where the famed adventurer and survivalist will take celebrities into the most remote and wild locations in the U.S. and around the world for a 48-hour journey of a lifetime.

Each of the celebrities endure the harsh wilderness in high-octane, action-based and empowering journeys spread over six remote locations. From skydiving into the Catskill Mountains, to repelling down the cliffs of Utah and battling torrential wind and rain in Scotland, Grylls and each celebrity will have to push both their minds and bodies to the limit to successfully complete their journey.

The show was created by Grylls, who recently starred on the NBC series “Get Out Alive with Bear Grylls.”

“‘Running Wild’ allows viewers to see inside the hearts and minds of these guests in a very open, honest and vulnerable way, pushing them out of their comfort zones and seeing what they are like in real life when stripped of all the benefits of celebrity,” said Grylls. “Ultimately, this show is about taking these stars on the adventure of a lifetime and being alongside them when they discover something new and empowering about themselves and their world. For me, that is always a privilege.”

“Bear’s incredible spirit is absolutely contagious, not only with his celebrity partners but with the viewing audience as well,” said Paul Telegdy, President, Alternative and Late Night Programming, NBC Entertainment. “We can’t wait to see how these epic adventures will profoundly change those who take the challenge.”

Bear Grylls Ventures (BGV), led by CEO Delbert Shoopman & CJ Cardenas, is a management and production company based out of Los Angeles. BGV manages all television, film, books, licensing and endorsement deals for Bear Grylls. The goal of the company is to develop and endorse projects that embrace adventure and inspire people to realize their dreams. Several product partners include Gerber Knives, Craghoppers, Bushnell, JIVO, F84 Games, Bear River and Kyocera.