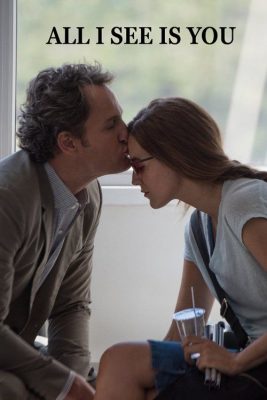 I walked into the movie cold, all I knew was it stared Blake Lively who finally got a chance to prove her acting chops in last year’s surprising star turn in The Shallows.  This time she tries sinking her chops in some dramatic material. Playing Gina, a woman who was blinded in a car accident at some point in time that the movie doesn’t make entirely clear. She’s always been somewhat dependent on your husband James, played by Jason Clarke who some may recognize from Terminator Genisys. Thanks to modern medicine she eventually gets a chance to finally see again and it opens her eyes to new experiences and she slowly starts to reevaluate her life, especially her marriage.

The movie moves at a languid pace. As the story unfolds we see cracks in the relationship from the start of the movie and see Jason’s insecurities go from a level 5 to 10. In one early scene he watches, with a repressed amount inner glee, his wife has a panic attack at a club, when she can’t find him, even though he’s just a few feet away from her. From that moment on, you know this relationship isn’t going to last once the blinders come off: literally and figuratively.

For some reason that’s never clearly explained the movie takes place in Thailand and Marc Forster shoots the hell out of the place. It looks beautiful and he lingers on various shots a bit too long, before switching to impressionistic moments where he blurs out and blends colors to simulate Gina’s viewpoints. I get what he’s trying to do but these sequences never quite work because I kept wondering if she supposed to be fully blind or partially blind where she can see blended colors and that’s it. I’m assuming it’s the latter.

The acting in this is just bad, This is Gossip Girl Lively and not The Shallows Lively. She sounded whiny throughout the entire film and there was no chemistry between Lively and Clarke. The disintegration of their marriage wasn’t surprising due to the film already showing us James’ controlling tendencies earlier on. I was never invested in this relationship. This is a director’s film and Forster never let us forget it.

As I said earlier, this is very much an impressionist film more than an actual story. The story felt shoved in and in the end, it leaves you with a pretty ambiguous ending and you all know I like stories that have a clear end. I walked out not only having watched a bad, bland movie, but I also didn’t get a proper closing sequence.