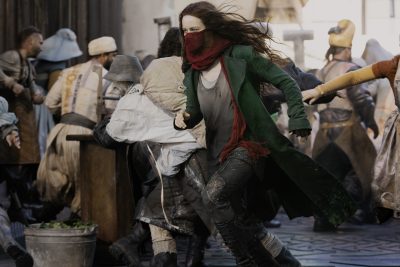 In a world ripped apart (literally) by quantum energy weapons called Medusas, Cities and towns could only survive by becoming mobile.

Mortal Engines opens with a chase sequence like nothing you’ve ever seen before – the massive London bearing down on a small mining town. It’s very exciting – but then we start meeting characters…

Mortal Engines is based on the first in a series of four books by Philip Reeve and set in a post-apocalyptic world where, in order to survive, towns and cities became mobile – larger, predator cities, like London, chasing down and, after taking in its inhabitants, using the deserted town as fuel.

The film’s steampunk design – and unique concept of civilization – provide some powerful visuals and unique circumstances (see London chasing down a mining town for its reusable materials.

The problem comes from the writing and the characters.
Hester Shaw (Hera Hilmar, The Ottoman Lieutenant, Da Vinci’s Demons) is a mysterious young woman who wears a red mask to cover a huge scar on the left side of her face.

When she sees London approaching, she joins the mining town’s people and is shepherded into London where she immediately tries to kill Thaddeus Valentine (Hugo Weaving, Matrix, Hacksaw Ridge).
Meanwhile, Valentine’s daughter, Katherine (Leila George, Mother May I Sleep with Danger), is visiting the London Museum – where she is given a tour of the museum’s old tech – by Tom Natsworthy (Robert Sheehan, Misfits, The Umbrella Academy) – for a paper she’s writing. The two have terrific chemistry – but that’s not where the film is going.

Nope. Tom and Hester wind off the city and stuck in the city’s tracks, looking for a way to survive. (Naturally, they don’t get off to a good start with each other).

In short order we meet a number of allegedly colorful characters like the old couple who take the pair in in order to sell them to slavers; the anti-tractionist Anna Fang (Jihae, Mars) – whom we only know of from a poster and off-hand remark by Valentine, and Shrike (voiced by Stephen Lang, Avatar, Into the Badlands), the last of the Lazarus Project – a reanimated man encased in metal – who wants to kill Hester Shaw.

These characters and others are thrown at us without any explanation (not even cursory) and all behave like we should know who they are. Shrike, at least, gets a backstory – and immediately becomes the one relatable character in the film.

Valentine, it turns out, has been stealing old tech – ostensibly to create a new power source that be longer lasting and more efficient.

Of course, he’s working on something much, much worse – And it’s up to Hester, Tom and Anna to stop him.

Mortal Engines was written by Peter Jackson, Fran Walsh and Phillipa Boyens, and it’s hard to believe that the trio who wrote the Lord of the Rings and Hobbit films would write a film so devoid of genuine energy once it gets beyond that first, awesome chase.

Casting missed the boat as well – Hilmar and Sheehan have no discernable chemistry, while Sheehan and George practically sparkle (to no avail).

I recall looking at my watch ninety minutes into Mortal Engines and thinking ‘it’s only 8:30?’ Not the best sign in a two- hour movie.
Even the presence of Colin Salmon (Limitless, Krypton) and Frankie Adams (The Expanse) and a host of talented support can’t budge this monolith from its path to mediocrity.

Rivers will, no doubt, get another shot. His direction is more than competent. He was just saddled with a really average script and chemistry-free leads.