In a world ripped apart (literally) by quantum energy weapons called Medusas, Cities and towns could only survive by becoming mobile.

Mortal Engines opens with a chase sequence like nothing you’ve ever seen before – the massive London bearing down on a small mining town. It’s very exciting – but then we start meeting characters…

END_OF_DOCUMENT_TOKEN_TO_BE_REPLACED 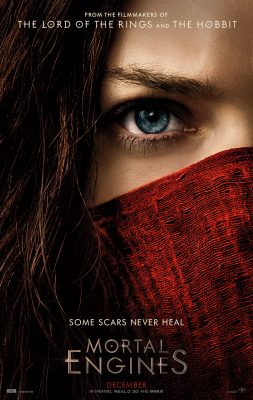 Hundreds of years after civilization was destroyed by a cataclysmic event, a mysterious young woman, Hester Shaw (Hera Hilmar), emerges as the only one who can stop London — now a giant, predator city on wheels — from devouring everything in its path.

Mortal Engines will be in theaters on December 14th.

END_OF_DOCUMENT_TOKEN_TO_BE_REPLACED

After the Six Minute War, the planet was devastated. Cities began launching themselves on gigantic engines so that they could travel to where there might be resources – or, in the case of great cities like London, prey upon smaller cities.

Based on the book by Philip Reeve, Mortal Engines – produced and co-written by Peter Jackson – will be in theaters on December 22, 2018.