The problem with Krypton is we know the planet explodes and how everything all ends. Do I really want to invest time in watching a show where I know everyone dies? But the producers of the series do two clever things; they set the show 200 years before the birth of Superman so we already know there’s a clock on all the characters due to simple age and they place all the events in the city of Kandor.

Many who are up on their Superman history know Kandor is the bottled city that Brainiac stole before the planet blew up. By using Kandor they producers are giving themselves wiggle room. This also serves to limit the area of coverage for locations. This is both good and bad. It’s bad because it limits the scope of the show. It’s called Krypton, I want to explore more of the planet instead of just the enclosed environments of Kandor.

While I do think Krypton is one of SyFy’s best productions in the last few years, it’s still a SyFy show and suffers from this weird position of being a show that has lofty ambitions but not a budget to go as big as it wants to.  The set design work is mostly dark and brownish interiors which gives the production sort of a low budget look especially since a large junk of the story takes place in the poor area of Kandor. Or in the ritzy high rises of council homes.

My one complaint with the show was there are hardly any outdoor shots or set pieces. The few CGI transitional shots were a welcome, beautiful respite from the dreary interiors. Exterior shots of Brainiac’s ship looked awesome.

The costumes design work on this show is what really sets up the world. While most of them are various shades of blacks, the cuts and fabrics used really goes a long way towards making me feel like this could be Krypton. While the first episode was a struggle to get through, just because of all the set-up work involved, around midway through the 2nd episode the show really starts to click for me.

200 years in the future Brainiac decides he’s tired of doing the dance with Superman and comes up with the brilliant idea (see what I did there?) to go back into time and destroy Krypton before Kal-El is even born. Unfortunately for Brainiac (Blake Ritson), Adam Strange (Shaun Sipos) gets wind of Brainiac’s scheme and goes back to warn Superman’s great grandfather Seg-El (Cameron Cuffe) who of course doesn’t believe him.  I loved the cast, everyone embodies their role and I’ll delve more into them when I start doing show recaps this weekend.

The first two episodes is largely focused on Adam trying to convince Seg-El his ridiculous story is true. We’re also introduced to the political class system on Krypton. Seg-El’s grandfather was executed for trying to warn the ruling council about Brainiac and the existence of other worlds. The El family lost their name and status. You’d think at some point these people would learn.

I’m assuming most of the show is going to focus on Seg-El trying to stop Brainiac in secret, while also trying to restore his family’s name and status. We see a little bit of this in first two episodes where for some unknown reason Seg-El is selected by one of the high-council members to marry his daughter.

I didn’t get what made Seg-El a desirable choice since he’s literally at the “bottom” of society, has no influence or power over anything.  At the same time Seg-El is in love with the commander of the guard’s daughter – Alura Zod (Ann Ogbomo) who is using her position as a guardsman to protect Seg-El as best she can. Tonally the show is mostly serious without being dour or depressing with Adam Strange providing what little comic relief there is to have.

SyFy Channel made the first 5 episodes of the 10 episode series available for review and the fact that the series has such a short run means every episode served a purpose and it didn’t have much time for filler. Brainiac already shows up on camera within the first 4 episodes and he’s scary as hell. The make up work here is superb. 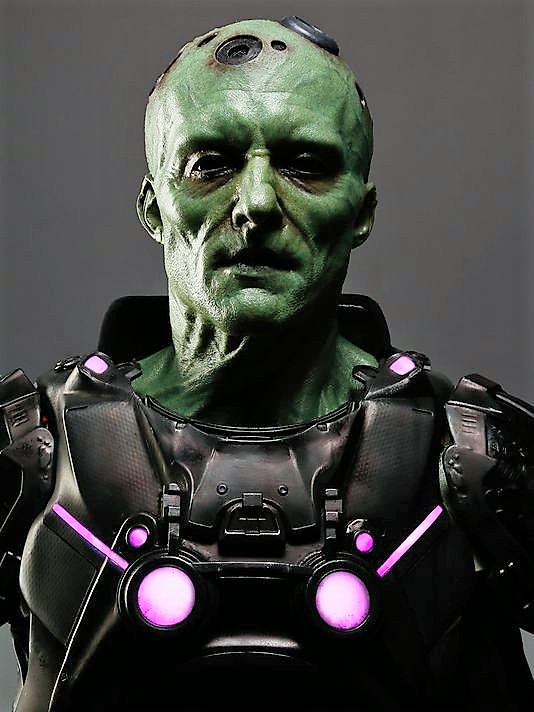 Krypton is the best thing SyFy has done in years. It successfully blends drama, action and political intrigue with some dense storytelling. I really want to see where this all goes.

Watch this space as I think I’ll probably do some recaps.