Jurassic World: Fallen Kingdom is a fast-paced thrill ride that serves as the middle chapter in a trilogy. It serves that purpose well – maybe even a bit better than average.

If there are flaws (and there are)… DINOSAURS!

In any movie trilogy, it’s tough to create a great middle chapter (The Empire Strikes Back and Superman II excepted) because there are far too many balls to keep in the air: key characters must face jeopardy that seems real, while they also have to appear in the finale; plot points introduced in the first film must be serviced while new plot points must be added to create new dynamics for the finale; familiar characters must show enough growth to be noticeable but so much as to preclude further growth in the finale, and new characters must be introduced that have relevance to the first film and add depth to the finale. 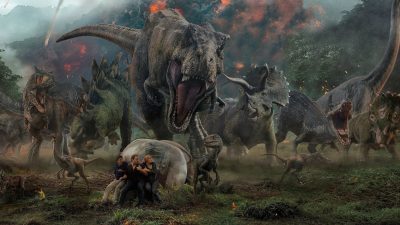 Jurassic World: Fallen Kingdom finds the former home of the Jurassic World dinosaur park threatened by a volcano – and there are people who want to save the dinosaurs from re-extinction.

When the governments of the world choose not to help, a group lead by Claire Dearing (Bryce Dallas Howard), the former general manager of the park, is approached by Eli Mills (Rafe Spall). His boss, billionaire Benjamin Lockwood (James Cromwell), is prepared to cover the expense of moving the dinosaurs to a nearby island where they can live undisturbed by the rest of the world.

Naturally, the adage about the road to Hell being paved with good intentions comes into play.

Revelation (if you haven’t seen the trailers): Blue (the raptor trained by Chris Pratt’s Owen Grady in the first movie) is still alive – and Owen is enlisted to coax her into being saved.

There are betrayals. Some of the people allegedly working for Lockwood are not – among them the leader of evacuation team, Ken Wheatley (Ted Levine) and amoral scientist, Dr. Wu (BD Wong) – and they have other plans.

When Lockwood’s granddaughter, Maisie (Isabella Sermon), discovers those plans, things go completely sideways in a hurry.
Are there plotholes in JW:FK? Of course there are! 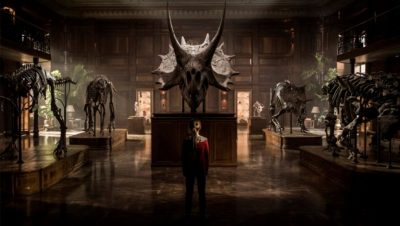 Every time there’s something that doesn’t work (volcanos don’t act like that), we get more dinosaurs – or a crucial plot point is revealed.

Do the surviving characters from the first movie grow? Sure! (Claire heads out on rescue mission in good, solid boots!)

Are there characters that will turn up in the finale in two years (or whenever)? Yes – including at least three (did I mention the paleoveterinarian? Yes, that’s a thing! Or the nerd IT guy whose primary function is to scream?)!

Is there spectacle? It’s Jurassic World so that’s an emphatic yes!
There’s even a breakup! (Very poignant!)

There are moments of creepiness; a few jump scares; some truly majestic cinematography, and superb CG dinosaurs. There are more than a few laughs and some high adventure, to boot.

Jurassic World: Fallen Kingdom fulfills its function well – and is one heckuva ride.