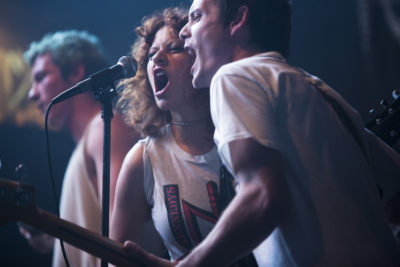 Green Room is a very simple horror story with not a trace of the supernatural – and by simple, I mean it’s a straightforward linear tale that has the simplest of plots: a hardcore band lacking funds gets a last-minute gig at a backwoods skinhead bar and just before they can collect their money, one of them sees something they should not have seen.

The Ain’t Rights are at the end of a crap tour – managing about six bucks a head from their last gig – when they have a gig practically fall into their laps – though it’s not particularly attractive. Beggars, however, cannot be choosers and so they wind up the aforementioned backwoods skinhead bar.

After their gig, they are about to leave when one of them sees a dead body in another room and suddenly things have gone way awry.

The band – leader/bass Pat (Anton Yelchin), drummer Reece (Joe Cole), guitarist Sam (Alia Shawkat) and vocalist Tiger (Callum Turner) – finds itself in a knotty situation. They’ve barricaded themselves in the green room, but there doesn’t seem to be any way out other than through the now blocked door. 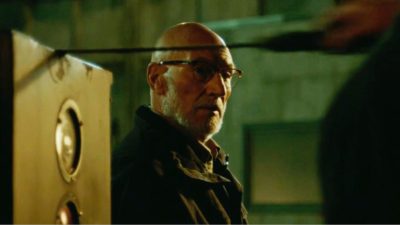 Even when they find an unexpected ladder, it leads to an underground storage room that has no other exit. They are well and truly screwed – as a friend of the victim’s, Amber (Imogen Poots), is quick to inform them.

Written and directed by Jeremy Saulnier (Blue Ruin), Green Room puts a bunch of hapless kids into a situation where fight or flight isn’t even a question – there’s no way for them to flee, so if they want to get out alive, they’re going to have to fight.

After taking about twenty minutes to explore the band’s dynamic (crap tour + lousy pay = friction!), Saulnier sets about putting the band through some first-rate nastiness – nastiness made even more terrifying by the addition of Patrick Stewart’s carefully modulated tones.

There are guns, knives, attack dogs and even a few sweet wrestling movies – but, basically, not everyone will be getting out alive. Saulnier finds interesting angles to play with – and he pretty much rockets through the film like a hardcore band shredding. 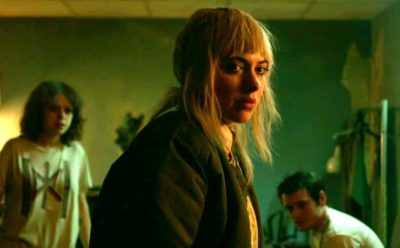 We know what’s coming – or at least we think we do – but Saulnier’s pacing and casting make the violence and death toll unexpected in terms of timing and degree.

Patrick Stewart and Imogen Poots were, for me, the standouts. Why she’s not a star is completely beyond me and he makes a very good villain (must be the Shakespearean background…).

I can’t think of anything that didn’t work for me – the script was lean and mean (ninety-five minutes); the direction and editing were as tight as I’ve ever seen and the performances were extremely good across the board.

If you’re looking for a surge of adrenaline this weekend, Green Room should do the trick.