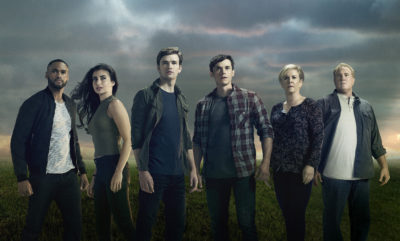 Freeform has ordered a second season for its new sci-fi hit Beyond.

The story of Holden Matthews – a young man who awakens from a twelve-year coma with powers he neither understands, wants nor can control – has become a ratings bonanza for the network through a combination of linear (weekly) viewing and bingewatching the entire first season.

For those who are interested in the numbers, read on.

In celebration of viewership that has gone above and “beyond,” Freeform has given a second season order to its newest hit series “Beyond.” Tom Ascheim, president, Freeform, surprised the cast and executive producers with the announcement during their TCA panel today in Pasadena, California.

”Our goal for launching ‘Beyond’ was to give the audience outstanding content in the way they want to watch it,” said Ascheim. “The response has far exceeded our greatest expectations, both quantitatively and qualitatively, and we can’t wait to bring more ‘Beyond’ to its growing fan base.”

“Beyond” launched on January 2, and in a network first, Freeform rewarded its digital-savvy audience by making available its highly anticipated new drama for binge-viewing across key digital platforms, featuring reduced ad loads to enhance the viewing experience and drive higher ad engagement. In its first week alone, “Beyond” has already amassed over 14 million views, including 7.0 million across digital platforms and reaching an additional 7.2 million Total Viewers on linear TV.

In fact, Freeform generated its best week across digital platforms in well over 4 years, powered by the debut of “Beyond” and the second season premiere of “Shadowhunters” – since 8/27/12.