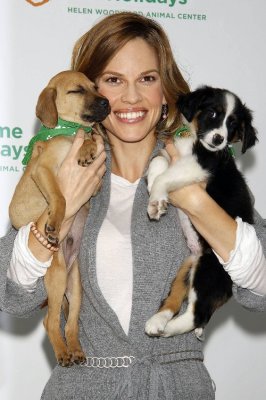 Co-hosted by Swank, this uplifting special for the whole family will be an entertaining and lively celebration of rescue dogs and the joy they bring to our lives. From basset hounds to boxers, pugs to pomeranians, puppies to seniors, THE GREAT AMERICAN DOG-A-THON will delight viewers with inspiring and often hilarious tales of rescue dogs, honor the best viral videos starring rescue pups, include musical tributes to amazing superhero canines and feature stories honoring people who dedicate their lives to rescuing animals in need. To top all this off, there will be a contest to win the latest dog feeder for your best friend!

Viewers will be provided with information regarding adoptable animals in their local areas. Additionally, the special will give viewers the opportunity to donate during the show to raise funds for rescue organizations throughout the U.S. It also will promote awareness of many dog-related issues and topics to encourage people to choose to adopt one of the more than eight million rescue animals currently in the U.S. shelter system, patiently waiting to become part of a loving family in a forever home. With millions of dogs left behind in animal shelters nationally, your new best friend could be waiting for you.  Specific details regarding charity partners will be announced soon.

“I have long been an advocate for animal adoption and know first-hand the immense joy a shelter animal brings to our lives,” said executive producer and co-host Hilary Swank. “Yet, every year more than four million animals are euthanized because of overcrowding in shelters. We are so fortunate to have an animal advocate in the FOX network that not only sees the need for more awareness surrounding this issue, but is willing to set aside a two-hour block for this important cause. This partnership will change the path of a soul for thousands of animals looking for their forever home.”

“We’ve seen the entertainment industry come together for so many worthwhile causes benefiting people, now it’s time for them to rally for man’s best friend. It warms my heart that so many animal loving celebrities are stepping up in support of all the beautiful souls that need us to be their voice,” said executive producer Michael Levitt. “This is our big opportunity to change the misperception of shelter animals and show the world that rescuing a dog is always the way to go.”

“There are a number of entertainment specials for humans, but very few for the species we humans most love and cherish. In this first-of-its kind event, FOX will offer viewers the chance to appreciate the role that dogs play in our lives, contribute to homeless dog charities, and even adopt rescue dogs of their own,” said Simon Andreae, Executive Vice President, Alternative Entertainment, FOX. “We know that Hilary and Michael’s passion and the enthusiasm of everyone involved will make a huge difference to the lives of hopeful humans and homeless dogs right across the country.”

Swank is a versatile artist with a wide range of projects spanning her more than 20 years in the entertainment industry. Her upcoming films include “The Homesman,” opposite director/screenwriter Tommy Lee Jones and “You’re Not You,” in which she stars and produces with Molly Smith through their production company, 2S Films. In addition to her work within the film industry, Swank has been a longtime supporter of several charity organizations, but recently expanded her reach in the philanthropy world with the launch of her own charity, The Hilaroo Foundation. Through her efforts, the foundation will bring youth, who have been given up on, and animals, who have been abandoned, together to help heal one another through Rescue, Rehabilitation, Animal Adoption and Responsibility Training.