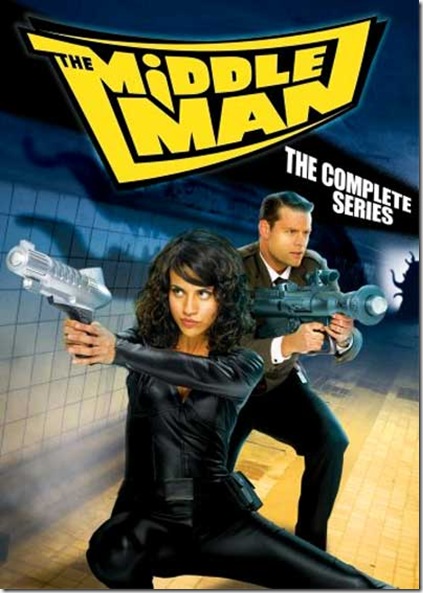 The Middleman [Matt Keeslar] made his first appearance at a laboratory where a misbegotten experiment had created a hentai tentacled monster that had just grabbed temp receptionist Wendy Watson [Natalie Morales]. Wendy had not panicked, but had grabbed a letter opener and was stabbing at the tentacle that was pulling her toward the monster’s mouth. The Middleman [we never learned his name during the twelve eps of the series] invited her to interview for a position with the Jolly Fats Weehawkin Employment Agency [this after she lost her job because the Zippo lighter with the DC-3 engraved on it, that was her father’s [whose DC-3 crashed under mysterious and as yet unexplained circumstances], is thought to be responsible for the “gas leak” that destroyed the lab where she was temping [and, omigawd, I’m writing like the characters in this show speak!]. 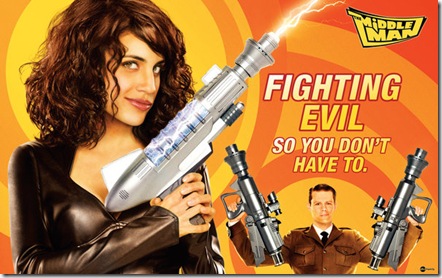 The rest of the series relates how Dubbie [as her boss calls her] learns to handle her new job while dealing with a boyfriend who breaks up with her so he’ll have some pain in his life [he’s at film school]; an equally photogenic artist roommate named Lacey [Brit Morgan]; their mutual friend, Noser [Jake Smollett]; the evil son of the landlord of the building where they live in an illegal sublet, and Ida [Mary Pat Gleason], the cranky receptionist/tech expert/robot that runs the Jolly Fats Weehawkin employment Agency office. From there, it’s a piece of cake: training with Sensei Ping [guest star Mark Dacascos]; fighting lucha libre wrestlers, boy band alien dictators, her evil self from an alternate universe and so forth.

The eps have titles like The Accidental Occidental Conception, The Sino-Mexican Revelation and The Ectoplasmic Pan-Hellenic Investigation – showing Javi’s fascination for the titles of Robert Ludlum’s novels [and maybe influenced just a tad by The Man From U.N.C.L.E.] – and each is an accurate summation of the week’s major problem [thereby stretching our imaginations both before and during each ep].

The series was shot is big shots with lots of action within them – like panels of a comic/graphic novel. The result is a rich texture that makes the series feel much larger than its budget should have allowed. The show’s pilot was shot by Jeremy Chechik and a giant yellow teddy bear from his movie, The Avengers, makes a cool cameo in the series. It was Chechik who developed the series shooting style.

Matt Keeslar does an excellent job as the true blue Middleman; Mary Pat Gleason’s Ida is delightfully curmudgeonly [her personality matrix is, apparently, stuck on “cranky librarian;” Brit Morgan’s Lacey is a lovably scatterbrained [and yet surprisingly intelligent] and contentious spoken word artist, and Jake Smollett’s Noser is the perfect balance to these livelier characters – laid back and very aware. 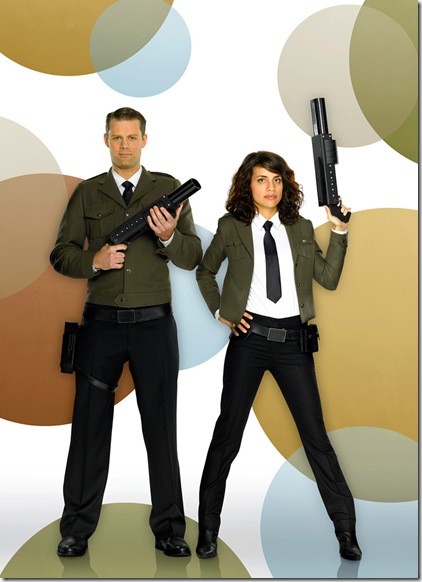 Except for Noser [most of the time, at least], everyone talks in a rapidfire, pop culture laden manner – and yet, each is a distinct individual. I would imagine that scripts for each one-hour episode must have run double, or even triple the usual fifty to fifty-five pages. I haven’t heard that much verbiage in a TV program since Moonlighting.

The set also includes a twelve-page booklet, Getting to Know Your Truth Bomb User Manual, which contains episode titles and teasers and a two-page introduction by Grillo-Marxuach. As an added little bonus, the back covers of the slimpaks [which are designed to look like The Middleman and Wendy’s personnel files] that contain the four DVDs feature four of the many fake ID cards used by The Middleman and Dubbie in their investigations – there are IDs for each for the following: U.S. Department of the Interior; Atkinson Memorial Insane Asylum; American Shrimp & Crab Processors, and the Mossad. Detail is everything…

Grade: The Middleman: The Complete Series –A