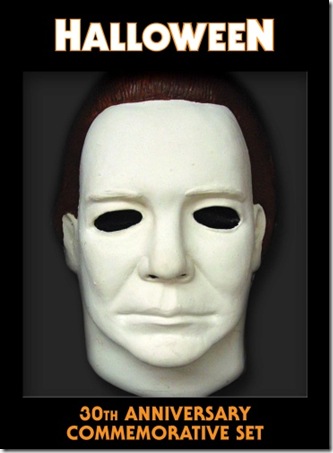 It’s been thirty years since a little horror movie changed the genre forever and gave John Carpenter a career. Halloween was something completely different – a story about a killer child who grew up to become the personification of evil, Michael Myers. To celebrate this anniversary, Anchor Bay Entertainment has packaged the three best films in the series along with a documentary on the Halloween phenomenon in a gorgeous display package featuring what they describe as “an exclusive display replica of the Michael Myers mask, which has become THE face of horror for the last three decades [sorry, head not included]! The six-disc set contains three versions of Halloween, Halloween 4: The Return of Michael Myers and Halloween 5: The Revenge of Michael Myers.

First up is the movie that began the series, Halloween – three versions, in fact, including the Blu-Ray version which, God willing and the river don’t rise, I will someday be able to screen.

Next is the restored original theatrical release – the version that made Michael Myers a horror icon and John Carpenter a much sought after director.

The original Halloween is moderately paced by today’s standards, but it’s steadily increasing pace and a terrific score by Carpenter [the Michael Myers theme is probably the second most well known theme after The Exorcist’s Tubular Bells] showed an uncanny grasp of how to commit suspense. For almost the entire first hour, we only see Myers [to whom the cast and crew referred to as “The Shape” during filming] in bits, and from the back – the left shoulder, the right shoulder, a shadowy figure in a station wagon.

The town of Haddonfield is supposedly in the midst of a sunny autumn, but the light feels sickly rather than beautiful and not even the gorgeous autumn leaves can compensate. The murder of his sister, by the six-year old Myers is the only real shock of the first two acts, but when he begins to kill again, fifteen years later, we finally get a look at the figure in the altered William Shatner mask – and he is scary.

As the man who knows what Myers has become, Donald Pleasance’s Dr. Sam Loomis is another character who becomes iconic in his pursuit of the killer. His role is twofold – track down Myers, and make the skeptics believe how dangerous Myers is. He is Inspector Gerard to Myers Fugitive, with the difference that Myers really is a killer.

Laurie Strode [Jamie Lee Curtis] is the first of the feminist icon heroines of modern horror as she alternately flees the implacable Myers and defends herself with cleverly improvised weapons [knitting needles, clothes hangers]. She is heroic in the best sense – even though she’s scared to death, she finds the courage and intelligence to defend herself.

Even today, Halloween is a first-rate thrill ride – if you can stand the building suspense long enough to get the horrific killing spree.

The third version of the film that is included here is a bit of a hybrid. When NBC bought the rights to air Halloween, it required several cuts to make the movie broadcast friendly. To replace the cut scenes and make the network’s two-hour timeslot, Carpenter, joined by Curtis, Pleasance and the crew of Halloween II, filmed twelve minutes of new footage especially for NBC. These new scenes are edited into the full original theatrical version of movie and are seen here for the first time on home video.

Halloween 4: The Return of Michael Myers

In Halloween 4, Michael Myers again gets free from the institution where he’s been held and heads for Haddonfield – this time to find and kill Laurie’s daughter, Jamie [Danielle Harris]. In his way are Loomis and Jamie’s stepsister, Rachel Carruthers [Ellie Cornell]. Other unfortunates to cross his path include Rachel’s very lusty friends, Kelly [Kathleen Kinmont] and Brody [Sasha Jenson].

This time, we get to see Myers a lot sooner than in the previous films but since we know what he is, sort of, the suspense comes from watching him track down Jamie – and seeing of Loomis can prevent him from killing her.

Once again, though, it’s a woman who makes it possible for Myers to be stopped. This time, it isn’t Jamie, his primary target, but Rachel – though the final scene remains among the creepiest ever filmed.

David H. Little may not be John Carpenter, but he does a solid job of pacing the film in such a way that he gets the maximum jump for his audience’s dollar. The script, by Alan B. McElroy, is smart enough that the film feels like the direct sequel to Halloween II.

Grade: Halloween 4: The Return of Michael Myers – B+

Halloween 5: The Revenge of Michael Myers

Once again, Michael Myers survives violence that would have rendered anyone else so much protoplasm on floor and takes after Jamie again. This time, the film is peppered with rednecks with shotguns in pick-up trucks – kind of a modern nod to the mobs of villagers that stormed the castles of Frankenstein and Dracula.

This time, Jamie is aided by Loomis, the police, the National Guard and a boy named Billy [Jeffrey Landman, who has a crush on her. Again, though, we see Myers in action early on, and the suspense is generated by the efforts of Jamie and Loomis to stop him.

Each succeeding Halloween instalment has picked up the pace until, with The Revenge of Michael Myers, it’s almost [but not quite] frenetic. Director Dominique Othenin-Gerard [who co-wrote the script with Michael Jacobs and Shem Bitterman] follows in Little’s footsteps by both introducing Myers early, and by keeping the pace to a pretty fair tempo most of the way through.

Grade: Halloween 5: The Revenge of Michael Myers – B+

The eighty-four minute title documentary is essential viewing if you want to find out why a silent, masked man with a knife has become one of the scariest icons of film [there may well never be a definitive answer beyond, people like to be scared – in a safe environment!]. Various people are interviewed: stars, stunt men, producers, fans – and none are hesitant to express their pleasure in being attached to the series, or of being fans.

Grade: Halloween: 25 Years of Terror – B