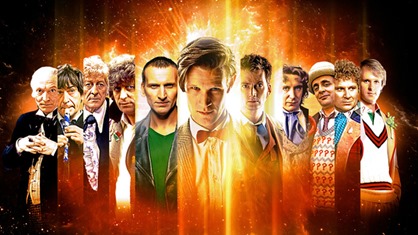 BBC AMERICA has partnered with Nerdist Industries to celebrate the 50th Anniversary of Doctor Who with the first ever live simulcast pre-show from the YouTube Space Los Angeles. Hosted by Veronica Belmont, the Doctor Who 50th Live Pre-Show will air November 23, 2:30pm ET on BBC AMERICA and stream to audiences globally on BBC AMERICA’s YouTube channel (youtube.com/bbcamericatv) just prior to the premiere of Doctor Who’s 50th anniversary special Doctor Who: The Day of The Doctor at 2:50pm ET.

For more, check out the press release after the ump.

DOCTOR WHO 50th LIVE PRE-SHOW CROSSES PLATFORMS TO CONNECT FANS IN THE U.S. AND AROUND THE WORLD

New York – November 19, 2013 – Announced today, BBC AMERICA has partnered with Nerdist Industries to celebrate the 50th Anniversary of Doctor Who with the first ever live simulcast pre-show from the YouTube Space Los Angeles. Hosted by Veronica Belmont, the Doctor Who 50th Live Pre-Show will air November 23, 2:30pm ET on BBC AMERICA and stream to audiences globally on BBC AMERICA’s YouTube channel (youtube.com/bbcamericatv) just prior to the premiere of Doctor Who’s 50th anniversary special Doctor Who: The Day of The Doctor at 2:50pm ET.

Doctor Who 50th Live Pre-Show will be an all-out celebration of 50 years of Doctor Who and its passionate fans. As the world awaits the global simulcast of the anniversary special, the pre-show will feature a live curation of fan-created content being shared on social media from celebrations around the globe, plus chats with special guests including YouTube star Phil DeFranco.

Perry Simon, General Manager, BBC AMERICA commented: “Doctor Who has an amazing social media following and is enormously popular, with millions of views on YouTube. Partnering with YouTube on an innovative pre-show will enable fans everywhere to join our celebration of this groundbreaking series’ 50th anniversary.”

“We’re very excited to work with BBC AMERICA and Nerdist on this first ever simulcast from YouTube Space LA and are looking forward to welcoming Doctor Who fans and YouTube talents for a truly innovative pre-show experience connecting communities all across the world,” said Liam Collins, Head of YouTube Space LA.

Veronica Belmont, co-host of the science fiction and fantasy YouTube video show, audio podcast, and book club The Sword and Laser, added: “I’m happy to report that the live pre-show went off without a hitch, and that fans everywhere thoroughly enjoyed The Day of the Doctor. At least, they did in the time stream I just came from."

BBC AMERICA is the U.S. home of Doctor Who and has been celebrating the 50th anniversary of its highest rated series throughout the year. Doctor Who Live Pre-Show is part of BBC AMERICA’s Doctor Who Takeover, a week of new programming and marathons. The anniversary of television’s longest-running sci-fi series is a global celebration, as Doctor Who will be simulcast for the first time in more than 75 countries. Written by Steven Moffat, Doctor Who: The Day of The Doctor stars the Eleventh Doctor, Matt Smith, the Tenth Doctor, David Tennant, companion Jenna Coleman, with Billie Piper and John Hurt.

BBC AMERICA delivers U.S. audiences high-quality, innovative and intelligent programming. Established in 1998, it has been the launch pad for talent embraced by American mainstream pop culture, including Ricky Gervais, Gordon Ramsay, Graham Norton, and successful programming formats including ground-breaking non-scripted television like Top Gear and top-rated science-fiction like Doctor Who. Owned by BBC Worldwide, the commercial arm of the BBC, BBC AMERICA has attracted both critical acclaim and major awards including two Emmy® Awards, five Golden Globes® and ten Peabody Awards. The channel attracts one of cable’s most affluent and educated audiences and is available on cable and satellite TV in 80 million homes. It broadcasts in both standard and high-definition, with content available On Demand across all major digital platforms. Online,www.bbcamerica.com is the place to go to dig deeper into pop culture with a British twist. Find out more by visitingwww.press.bbcamerica.com or follow us onwww.twitter.com/bbcamerica.

Nerdist Industries is a multi-platform creator of genre and popular culture content. Its online presence includes a website at Nerdist.com, a premium YouTube channel (youtube.com/nerdist), Nerdist News daily e-newsletters, 2 million Twitter followers, a Podcast Network including the flagship Nerdist Podcast, and the Nerdist Alliance, a community of curated partnerships with some of YouTube’s most talented and passionate creators.  Nerdist also produces content for television including All Star Celebrity Bowling for AMC and In the Name of Science for National Geographic Channel. Further, Nerdist hosts live events around the country such as The Nerdist Podcast Live! and Course of the Force, an annual lightsaber relay in partnership with Lucasfilm LTD and Octagon which leads up to San Diego Comic-Con International.