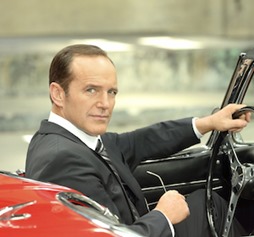 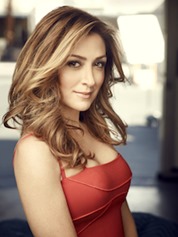 Agents of S.H.I.E.L.D.’ Clark Gregg and Rizzoli & Isles’ Sasha Alexander will announce the nominees for the 20th Annual Sreen Actors’ Guild Awards on December 11th. Alexander is also acting as the SAG Awards Social Media Ambassador. The nominations announcement will be broadcast live on TNT the morning of Wednesday, December 11th at 9/8C and webcast live on tntdrama.com and tbs.com.

The 20th Annual Screen Actors Guild Awards ceremony will be simulcast on TNT and TBS on Saturday, January 18, 2014 at 8/7C. For more details, check out the press release after the jump.

Sasha Alexander, star of the TNT original drama Rizzoli & Isles, and Clark Gregg, star of the ABC series Marvel’s Agents of S.H.I.E.L.D., will reveal the 20th Annual Screen Actors Guild Awards® nominations on Wednesday, Dec. 11, at the Pacific Design Center in West Hollywood. The nominations announcement will be telecast live on TNT at 9 a.m. (ET) / 6 a.m. (PT) and webcast live on tntdrama.com and tbs.com. Prior to the announcement, this year’s stunt ensemble nominees will be unveiled during a live webcast at 8:50 a.m. (ET) / 5:50 a.m. (PT).

Alexander has also been named social media ambassador for this year’s SAG Awards. During the six weeks leading up to the 20th Annual Screen Actors Guild Awards ceremony – which will be simulcast live on TNT and TBS on Saturday, Jan. 18, 2014, at 8 p.m. (ET), 7 p.m. (CT), 6 p.m. (MT) and 5 p.m. (PT) – Alexander will serve as the online face for the awards. Through posts on Twitter and Facebook, she will give viewers access to behind-the-scenes moments, including updates on the production, presenters and fashion. She will also be posting from the red carpet on awards night.

In TNT’s Rizzoli & Isles, which is set to return with new episodes in February, Sasha Alexander plays brilliant and eccentric medical examiner Maura Isles, who works closely on cases with Boston Police Detective Jane Rizzoli, played by Angie Harmon. Prior to her role on Rizzoli & Isles, Alexander played Special Agent Caitlin Todd in the first two seasons of the popular drama NCIS. She was also a regular on the critically acclaimed drama Dawson’s Creek, as well as Presidio Med and The Nine. In addition, she has had guest-starring roles on such popular shows as Friends, House and Greg the Bunny. She most recently was the romantic lead opposite Rhys Darby in the movie Coming & Going, which premiered on TNT in July 2011.

On the big screen, Alexander was part of the all-star cast of the hit film He’s Just Not That Into You and co-starred with Jim Carrey in the movie Yes Man. Her other feature film credits include Mission: Impossible III, Tenure, Love Happens, The Last Lullaby, Play Dead and All Over the Guy, as well as the upcoming The Girl from Nagasaki, a modern adaptation of Madame Butterfly.

As a mother, Alexander has been a passionate advocate of sustaining an environmentally healthy household. She’s a supporter of Healthy Child, Healthy World, an organization that empowers parents to protect children from harmful chemicals. Additionally, Alexander is heavily involved with the UN Foundation and their amazing programs for empowering and educating young women around the world, including GirlUp and the Shot@Life Campaign.

Clark Gregg currently stars as Agent Phil Coulson in the ABC hit series Marvel’s Agents of S.H.I.E.L.D., a role he previously played in the movie blockbusters The Avengers, Thor and the Iron Man films. Gregg co-starred with Julia Louis Dreyfus on the comedy series The New Adventures of Old Christine. He is also known for recurring roles on The West Wing, Sports Night, Will & Grace and Sex and the City.

Clark began his acting career as a founding member and former artistic director of the Atlantic Theater Company in New York. He moved to Los Angeles in the mid-’90s to pursue film and television work and has since appeared in such films as Joss Whedon’s adaptation of Much Ado About Nothing, The To Do List, Trust Me, Labor Day, Mr. Popper’s Penguins, 500 Days of Summer, Choke, In Good Company, Spartan, Magnolia and The Human Stain. He earned an Independent Spirit Award nomination for his work in Tod Williams’ The Adventures of Sebastian Cole.

An experience screenwriter and director, Gregg wrote the screenplays for such films as What Lies Beneath and the Sundance Special Jury Prize winning Choke, which also marked his directorial debut. His second film, Trust Me, which he directed from his own script, stars Gregg, Amanda Peet, Allison Janney and Felicity Huffman. It premiered at the 2013 Tribeca Film Festival and will be released in May 2014.

About the Screen Actors Guild Awards®

Lauded by critics for its style, simplicity and genuine warmth, the Screen Actors Guild Awards® (SAG Awards®) annually celebrates the outstanding performances in motion pictures and primetime television from the previous calendar year. Of the top industry honors presented to actors, only the SAG Awards are selected entirely by performers’ peers in SAG-AFTRA. The SAG Awards was the first televised awards show to acknowledge the work of union members and the first to present awards to the cast of a motion picture and to television drama and comedy ensembles, reflecting the fundamental principle that acting is a collaborative art.

TNT is television’s destination for drama. Seen in 101 million households and ranking among cable’s top networks, TNT is home to such original drama series as Rizzoli & Isles, Major Crimes, Falling Skies, Perception, Dallas and Franklin & Bash, as well as the upcoming Mob City, Legends, The Last Ship and Murder in the First. The network also features dramatic unscripted originals like Cold Justice, Boston’s Finest and the upcoming Marshal Law: Texas, APB with Troy Dunn (working title), Save Our Business, Inside Job, Private Lives of Nashville Wives, Life Flight, On the Menu (working title) and Wake Up Call (working title). In addition, TNT is the cable home to popular dramas like Hawaii Five-0, Castle, The Mentalist, Bones and Supernatural; primetime specials, such as the Screen Actors Guild Awards®; blockbuster movies; and championship sports coverage, including NASCAR, the NBA and the NCAA Division I Men’s Basketball Championship.

TBS is basic cable’s reigning champion among young adults in primetime. Available in 101 million households, TBS features original scripted comedies like Cougar Town, Sullivan & Son and Men at Work, as well as the upcoming Ground Floor and American Dad!, which will become a TBS original series in late 2014. TBS also features original unscripted series like King of the Nerds, Deal With It and Trust Me, I’m a Game Show Host, as well as the upcoming CeeLo’s Goodie Life (working title). In late night TBS, is home to the Emmy®-winning series CONAN, starring Conan O’Brien, and the new late-night series The Pete Holmes Show. The TBS lineup also includes popular contemporary comedies, such as The Big Bang Theory and Family Guy, along with blockbuster movies and championship sports.