Deadpool 2 opens with the day-to-day living of Wade Wilson (Ryan Reynolds). Deadpool, the merc-with-a-mouth, is gainfully employed as a globe-trotting, wise-cracking assassin who dispatches foes ruthlessly and with grotesque creativity (credit where credit is due). Supporting him endlessly is his love Vanessa (Morena Baccarin) and overall life is grand. A time-traveling mutant named Cable (Josh Brolin) is about to test all of that.

With a modicum of desire to become a more “typical” superhero who does “good,” Deadpool tips his red spandex-covered toe into the X-Men waters, and asks to join the infamous team under the tutelage of Colossus (Stefan Kapicic). On an early mission, Deadpool encounters a troubled temper-laden young mutant named Russell (Julien Dennison), who is raging against the reform school he’s been forced into where torture appears to be the medicine de jour. While Deadpool successfully removes the boy from his current predicament, using some morally-questionable means, Cable appears soon after with a mission of killing Russell in order to prevent future genocide. Will Cable succeed? Not if Deadpool has anything to say about it! (spoiler alert—he has a lot to say about it). 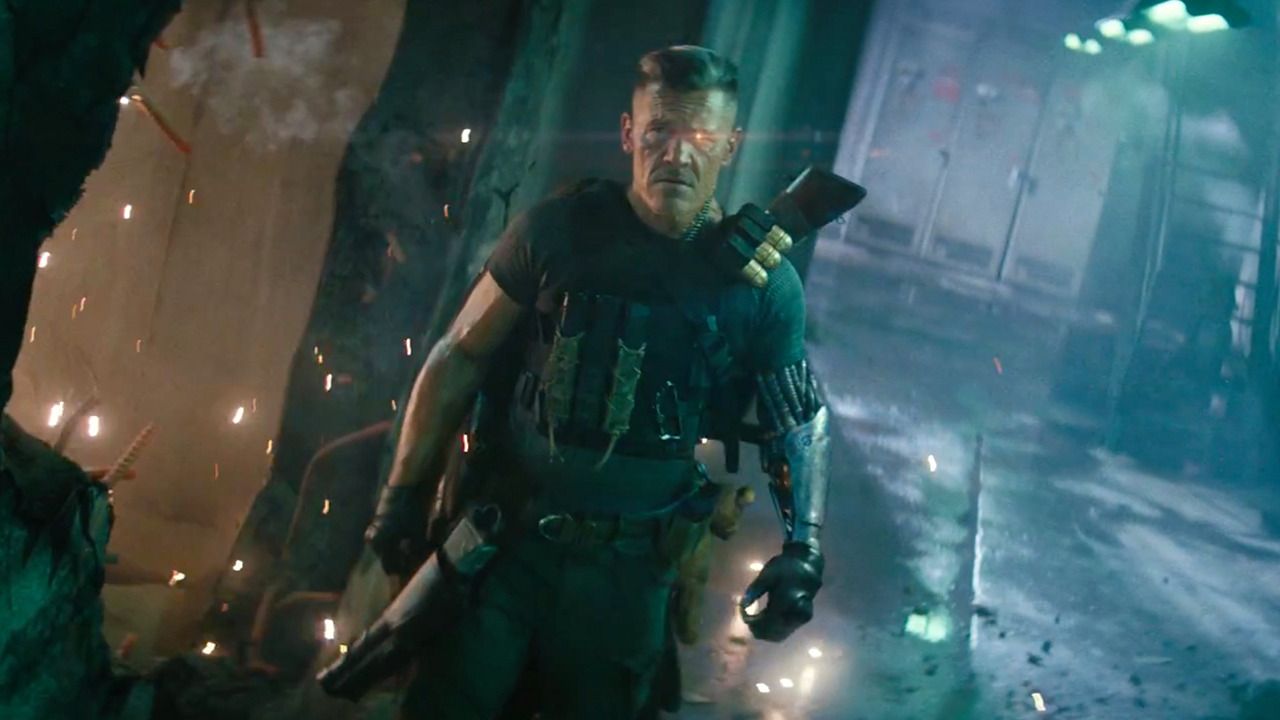 Everything in Deadpool 2 is an amplification of its predecessor. With that context, what works in this sequel are a good enough majority of the jokes, and the choreography. The first category requires some dissection. The humor in Deadpool 2 is a complex cocktail of various ingredients that often mix into something delicious. This includes Reynolds’ charm and chemistry with the gruff Brolin, self-aware and timely writing, unexpected twists and surprises, and some choice music selections. At many times, Deadpool 2 is laugh-out-loud funny doubling-down on the brand of humor established in the first outing.

In terms of budget expansion, Deadpool 2 mostly makes good use of the windfall from the first film pumping a large majority of the dollars into complex action sequences. While the first Deadpool was wisely contained, the sequel includes some rather impressive and expansive set pieces and sequences. Perhaps the most engaging and entertaining is a heist/caravan chase near the end of the second act that begins with a hilarious sky-diving sequence, ends with glorious epic destruction, and fills the middle with the wanton silly violence that audiences are looking for in this franchise. On the whole, the fights are extremely well designed and executed, likely thanks to director David Leitch who previously demonstrated his prowess in this realm with John Wick.

While Deadpool 2 checks all the recommended boxes for developing a sequel, going bigger across the board doesn’t always lead to unequivocal success. For example, Deadpool 2 essentially throws the kitchen sink at the wall to see what will stick in terms of comedy, especially with the dialogue. The ones that land without question will solicit laughs, but for every memorable line two fall flat. In addition, while Deadpool 2 attempts to ramp up the laughs and action, it also wants to deliver a film that is a bit more dramatic and thematic as well. The result of these strategies is a film that is often uneven, and occasionally predictable, especially in the first act of plot development and when the writers attempt to craft sequels to specific jokes from the first movie.

Deadpool 2 will likely satisfy fans of the first outing, but it does lack the shock and awe of the previous film. Gory is now gorier, raunchy is now raunchier, and in enough cases funny is now funnier.  It won’t win over any new fans, but at this point audiences should know what they are signing up for with Deadpool 2 and it does stick a superhero landing of its own—a very serviceable and pleasing sequel.