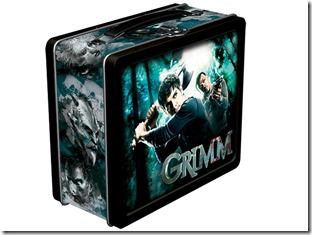 Dark Horse Deluxe has partnered with NBC’s Grimm for a line of cool, no doubt Wessen-approved products like the secret map key pin and lunchbox shown above. For more details, follow the jump to the official press release.

Grimm is a cop drama inspired by the classic Brothers Grimm fairy tales, following Portland homicide detective Nick Burkhardt into a reality he never knew existed. Once he discovers this new world, and his role in it, he has to deal with much more than the usual criminals and investigations. With his partner Hank and ally Monroe (who is also a magical creature called a Blutbad), Nick delves into cases involving bees, bats, bears, and more!

“As Portland residents, we feel a special kinship with a series filmed in our hometown,” Dark Horse Product Development VP David Scroggy observed, “although we would have been drawn to Grimm if it were filmed in North Dakota. The production team has been most accommodating, inviting us to visit the sets, examine the props, and meet with the key design and VFX staffers to help inform our line. This kind of cooperation is rare, and it has ensured a great accuracy down to the smallest details.”

Dark Horse Deluxe is launching their Grimm line with an assortment of products. The centerpieces of this first wave are sculpted, wearable pin replicas of Nick’s key and one of the coins of Zakynthos.

Nick is bequeathed the key as his dying Aunt Marie introduces him to his destiny as a Grimm, warning him to guard it with his life. The key is revealed to have a map carved on the outside, which is etched into the replica pin’s surface. Two small loops on the key allow the wearer to easily convert it from a pin to a hanging pendant. The mysterious, ancient coin of Zakynthos has a long history of bringing a bad end to its possessors, although the Grimms seem strangely immune. While its purpose remains a mystery, various dark forces are seeking it and will kill to attain ownership of it. The Dark Horse coin pin replica is given an antique finish over zinc alloy, re-creating the patina of antiquity.

An embossed, heavy-gauge, litho-printed, classic tin lunchbox, a sixteen-ounce pint glass, a deluxe coffee mug, and an embroidered skull-design patch round out the initial range of collectibles. Dark Horse will continue to offer more Grimm products, including busts, journals, and playing cards, and some very cool lenticular items. Stay tuned . . .

Look for these Grimm collectibles on sale September 25, 2013, at fine retailers everywhere!

Founded in 1986 by Mike Richardson, Dark Horse Comics has proven to be a solid example of how integrity and innovation can help broaden a unique storytelling medium and establish a small, homegrown company as an industry giant. The company is known for the progressive and creator-friendly atmosphere it provides for writers and artists. In addition to publishing comics from top talent such as Frank Miller, Mike Mignola, Neil Gaiman, Brian Wood, Gerard Way, Felicia Day, and Guillermo del Toro, and comics legends such as Will Eisner, Neal Adams, and Jim Steranko, Dark Horse has developed its own successful properties, including The Mask, Ghost, Timecop, and SpyBoy. Its successful line of comics and products based on popular properties includes Star Wars, Mass Effect, Buffy the Vampire Slayer, Aliens, Conan, Emily the Strange, Tim Burton’s Tragic Toys for Girls and Boys, Serenity, and Domo. Today Dark Horse Comics is the largest independent comic book publisher in the US and is recognized as one of the world’s leading publishers of both creator-owned content and licensed comics material.