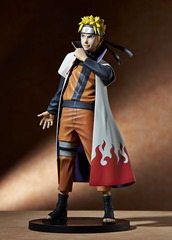 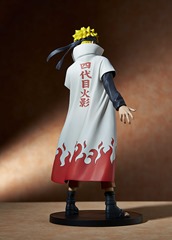 In this limited edition version, Naruto Uzumaki is rendered in high quality full-color PVC, standing approximately 27cm tall and wearing the 4th Hokage’s famous coat. Crafted by skilled Gecco sculptor/painter Shin Tanabe with painting by Katsushige Akeyama, the intensity of Naruto’s expression has been carefully designed to show his fierce resolve to face enemies in order to protect his friends and save the world. The statue features a highly detailed costume capturing every wrinkle and texture, a true indicator of the exceptional craftsmanship of this masterpiece. The Gecco Naruto Uzumaki, 4th HOKAGE coat version, will carry an MSRP of 150.00 and will be available during 2014 Comic-Con at the VIZ Media booth #2813 (while supplies last).

“This exceptionally detailed statue of Naruto wearing his father’s red flamed coat can become the special centerpiece to a collector’s display, and we are proud to partner with one of the most exclusive Japanese figure manufacturers, Gecco, to present it as a 2014 Comic-Con exclusive product,” says Daisuke Aoki, VIZ Media Vice President, Animation Licensing. “This limited production figure will be one of the most sought after items during Comic-Con and is sure become a highly desirable item among pop culture collectors, comics, anime and manga fans. We look forward to welcoming Gecco to the VIZ Media booth during the show to secure one of the hottest new NARUTO SHIPPUDEN collectables.”

“I wanted to see the greatest Naruto figure with my own eyes, and am excited to partner with VIZ Media to make this a reality!” says Kineo Murakami, founder, Gecco. “The only person who can bring Naruto to vivid life is sculptor Shin Tanabe, and I’m sure anyone who sees this limited edition NARUTO SHIPPUDEN figure will marvel at this masterpiece!”

In the NARUTO manga and animated series, Naruto Uzumaki wants to be the best ninja in the land. He’s done well so far, but with the looming danger posed by the mysterious Akatsuki organization, Naruto knows he must train harder than ever and leaves his village for intense exercises that will push him to his limits. NARUTO SHIPPUDEN begins two and a half years later, when Naruto returns to find that everyone has been promoted up the ninja ranks – except him. Sakura’s a medic ninja, Gaara’s advanced to Kazekage, and Kakashi…well he remains the same. But pride isn’t necessarily becoming of a ninja, especially when Naruto realizes that Sasuke never returned from his search for Orochimaru. Plus, the mysterious Akatsuki organization is still an ever-present danger. As Naruto finds out more about the Akatsuki’s goals, he realizes that nothing in his universe is as it seems. Naruto is finding that he’s older, but will he prove wiser and stronger?

Gecco was established in July 2011 as a figure manufacturer in Higashi Osaka, Osaka Prefecture, Japan. Founded by Kineo Murakami, the company’s goal is to create figures Murakami would personally want in his collection. This mandate of creating desirable figures has garnered the support of many figure collectors and enthusiasts around the world. Some of the best-known figures created by Gecco are from the Silent Hill video game series, and each figure created is highly detailed, crafted with exceptional mastery, using the best materials.