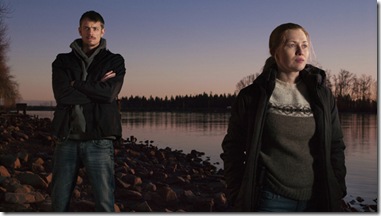 The murder investigation is assigned to Sarah Linden [Mireille Enos], a quiet, observant woman who has a knack for solving cases that baffle most other detectives, even though it’s her last day before leaving Seattle to get married and build a new life for her and son. She is ‘requested’ to show her would-be replacement, Stephen Holder [Joel Kinnaman], a blunt, somewhat off-center man, the ropes as he will take over the investigation when she leaves.

Rosie’s family, father Stanley [Brent Sexton, Deadwood, Life] is happily married and owns his own business – a moving and storage company. Her mother, Mitch [Michelle Forbes, True Blood, Global Frequency, Durham County] is a cheerful, engaging woman who has overcome unfavorable circumstances to wind up in a genuinely happy marriage.

Darren Richmond [Billy Campbell] is the mayoral candidate whose campaign becomes a part of the investigation when Rosie’s body is found in the trunk of a car belonging to his campaign [and submerged in a nearby lake]. Jamie Wright [Eric Laden] is his campaign manager, and callous enough to want to use Rosie’s death in the campaign. Gwen Eaton [Kristin Lehman] is Richmond’s chief advisor – and the two are having an affair he wants to take public, which she is resisting. 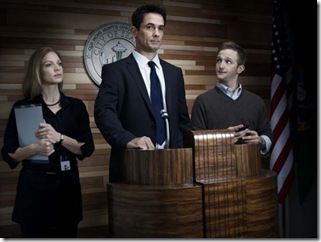 What makes The Killing [based on the Danish series, Forbrydelsen, adapted for North America by Veena Sud]] different is that it doesn’t just present a case and follow it through. It takes a deeper look into the lives that surround the case – something a regular mystery/procedural just hasn’t got the time to do.

We learn what’s going in the lives of everyone who might be of interest in regard to the case, whether it’s Linden’s relationship with her fiancé [Callum Keith Rennie], or the way that Richmond’s campaign manager keeps trying to find a way to use Rosie’s death to the campaign’s advantage; whether it’s seeing the primal reaction of Rosie’s parents, even as they to be strong for their two remaining children, or the way Rosie’s best friend, Stirling deals with the results of her lying about Rosie’s whereabouts.

Stylistically, the series – set in Seattle; shot in Vancouver, B.C. – might remind of other shows set in rainy climes, like Millennium [without the supernatural overtones, or David Lynch’s Twin Peaks [especially with it’s ‘Who Killed Rosie Larsen?’ teaser poster]. It might even hint of Durham County. Overall though, it is its own thing – a mesmerizing, layered drama that draws us deeper with every layer it pulls back. If you’re looking for a fresh, intelligent and genuinely affecting television series to follow, you need to check out The Killing.