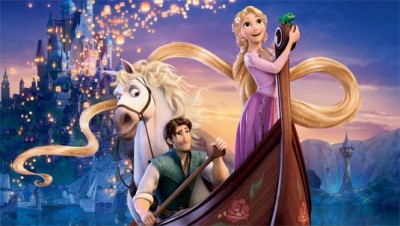 Disney’s 50th Animated movie recently hit the old Blu-ray format. Knowing how well Disney generally does with it’s Blu-ray releases, I was expected a feature packed release to celebrate this major milestone in the studio’s history, instead Disney Home Video plays it safe and phones it in, in this “featureless” Blu-ray” release.

Tangled is a strange animal. It wants to be a modern animated film with all of the modern trappings but it’s also Disney’s 50th Animated film, so it has to show both sides of the mouse house – it’s roots as an innovative in animation and wholesome good fun, while also showing us that Disney Animation is moving forward and competing with that “young” upstart Pixar Animation.

I freely admit that I’m a fangirl of Classic Disney animation and while I appreciate the stories in Pixar films, I’m not a fan of their CGI work – everything just looks too clean and perfect. It feels a bit hollow to me. I also find the computer animation in Tangled to look just as weird as a Pixar film, but for some strange reason the imperfection here added a little bit of depth to the character. This also isn’t a Disney vs. Pixar battle since Disney owns both companies. My preference is classic hand drawn animation.

This long winded opening paragraph about classic vs. old Disney is my roundabout way of saying that yes, for no apparent reason characters will just randomly break out into song at the oddest times. Just when you think, ok, this is a pretty straightforward retailing of the Rapunzel story, there’s a bad song thrown in. And these are not particularly good, or memorable songs.

We have all the trappings of the original story, the Princess (Mandy Moore) with the long magical hair that grants long life to people, the handsome rogue thief Flynn Rider (played by Chuck’s Zachery Levi) who discovers the lost Princess. I enjoyed the banter, but this is classic “old school” Disney so the dialogue and jokes don’t feel particularly contemporary. The singing is terrible and the voice acting is pretty bland. With that said, I still liked this movie at face value. It moves at a pretty good clip, it’s just not ground breaking, innovative or that memorable.

After doing 200 Blu-ray reviews, I’ve run out of things to say about how great the format is, Tangled is no exception, the colors pop-off the screen. The flawless transfer brings to mind my original review where I mentioned that sometimes “perfection” detracts from the overall experience that happens here. It’s so flawless that you can’t help but know that yep, it’s CGI. The audio sounds great, but great audio quality doesn’t make up for lousy musical numbers.

The extras on this are pretty light. We get a nice little three minute clip that countdown’s all 50 Disney Animated movies, a couple of deleted scenes, alternative story boards, and a 12 minute making of featurette.

Tangled is a decent rental, but not a must own Blu-ray set.