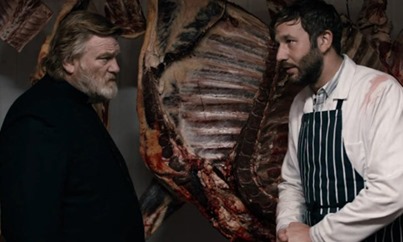 An Irish priest in a country parish is hearing confessions when a voice tells him of how he was abused by a priest as a child and has decide that killing an evil priest wouldn’t get much notice but killing an innocent one would make a point. He gives the priest a week to get his affairs in order.

Calvary is the story of that week.

Calvary is writer/director John Michael McDonagh’s follow up to The Guard. Like that film, it takes the mickey out of some stereotypes while building a sense of urgency without ever really ramping up its pace.

Father James (Brendan Gleeson) is the priest who has a week to make his farewells. He’s come into the priesthood late – taking the vows after his wife died, leaving him one of the few members of the priesthood to have a legitimate, if troubled daughter (Kelly Reilly).

Like most country priests, Father James knows everyone in his parish and, seemingly gets on with every one of them. He even manages to remain on decent enough terms with aggressively atheist surgeon Frank Harte (Aidan Gillen, Game of Thrones, Thorne).

A quick trip around town suggests that pretty much none of the locals is particularly nice: Butcher Jack Brennan (Chris O’Dowd, Bridesmaids, Moon Boy) may be abusing his wife, Veronica (Oral O’Rourke, Strike Back), who, in turn, has a reputation for sleeping around; Simon (Isaach De Bankolé, 24) is an immigrant from the Ivory Coast – and Mrs. Brennan’s latest boyfriend; Inspector Stanton (Gary Lydon, War Horse) frequently entertains gay prostitute Leo (Owen Sharpe, titanic: Blood and Steel, The Guard) – or maybe it’s the other way around; The Writer (M. Emmett Walsh, Unsub, Blood Simple) is a curmudgeonly writer who plans to kill himself after he finishes his book, and so on. 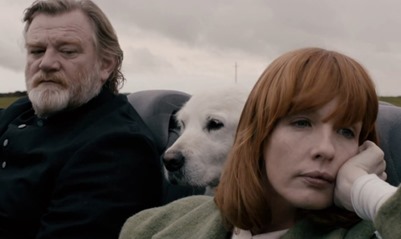 Who is it that is planning to kill him? For us it’s a mystery, but not for him. He recognized the voice and goes about his week as usual, for the most part. A visit from his daughter, Fiona, adds a bit of depth and intimacy to the film on a different level. She’s only just attempted suicide and he has other clouds hanging over him that he can’t share with her.

McDonagh has an eye for human nature and shows it in ways large and small – an impish altar boy turns out to have a gift for art; Father James’ fellow priest, Father Leary (David Wilmot, Ripper Street, The Guard) is a fussbudget who is clearly in the wrong job; Dr. Harte seems to have no empathy – which might make him a better surgeon, and so forth.

In much the same way, McDonagh sees the beauty, majesty and loneliness of nature – scenes shot on the local beach have an austere beauty that is almost spiritual – but balances that with equally beautiful shots (like that of a burning church) that seem spirituality’s antithesis.

Irony plays no small part in Calvary, as well. If Father James wasn’t a decent human being who was good at what he did, he wouldn’t be facing the prospect of his own death at the hands of a parishioner. That he’s human enough to lose his temper after one extraordinarily badly timed cruel joke at his expense only serves to underscore his humanity.

This is a man who will visit a convicted serial killing cannibal (Domhnall Gleeson, About Time) when requested – in the hopes of maybe helping him, so when he does lose his temper, you know it’s taken far more to push him over the edge than it would the average guy.

Calvary is the world in microcosm – one good man in a town of people who are less so, representing the way the world seems to be falling more and more into despair, or at least despondency in spite the best efforts of good people.

McDonagh seems to be asking if the presence of any amount of good is enough to make the world worth the effort to try to save it. He’s doing it with pitch black humor and even darker farce – all wrapped up in magnificently melancholy cinematography and brilliant performances.