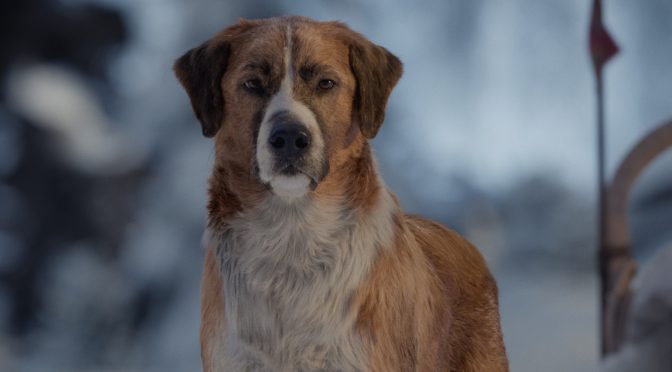 Buck is a big, unruly dog (think Beethoven, but much worse). His family loves him, but he is a colossal pain (even though he probably means well).

Through some sinister machinations and hard work, Buck is kidnapped and sent off to the Yukon to serve as a sled dog for a postal delivery service provided by the French-Canadian Perrault (Omar Sy, The Intouchables) and his partner, Françoise (Cara Gee, The Expanse).

Eventually, he finds a home in the north – but not until more than a few adventures and making a few friends.

I’m told the film takes liberties with the story (if I ever read the book, it was the comics Illustrated comic when I was a kid), but there’s enough adventure and excitement to keep even the biggest kids happy.

Most of the feature credited cast have little more than cameos (Bradley Whitford, Karen Gillan and Michael Horse among them), but each serves to provide a key piece of the story.

Dan Stevens’ Hal is the villain of the piece – he dognaps poor Buck to make money to get to the Yukon so he can join the gold rush – but like a bad penny, he keeps turning up.

Omar Sy and Cara Gee have the second-largest arc as they (eventually) train Buck to pull their sled (the lead dog is a bully, so you can sort see events before they transpire). Their relationship is that of polar opposites attracting – but they somehow work well together.

Harrison Ford is John Thornton a tough, resourceful gent who fled his life with his wife after the death of their son.

Now he drinks a lot but treats buck well the two times he encounters him before the dog is sold by Perrault and Françoise to Hal.

Despite Thornton’s warnings, things go wrong for Hall and his sister, Mercedes (Karen Gillan, onscreen for less than two minutes) – and buck winds up with the old man.

Thornton takes Buck in and, after some thought (and some opposition by Buck to his drinking), decides to honor his son’s memory by following a map they’d drawn before the boy dies.

In between these plot points, Buck has many adventures – learning to stick up for himself; saving lives, and generally becoming the kind of dog his original owners would have loved him to be.

Because the animals in Call of the Wild were CGI, they aren’t (quite) perfect, but after a few moments, they work just fine. (Besides the ASPCA would have conniptions if the director was to send a dog over some nasty rapids in a canoe!)

Buck (and most of the animals, for that matter) may be a bit to anthropomorphized, but that helps – along with committed performances from Sy, Gee and ford – to make this corny take on the classic work.

Would Call of the wild have been a better film if Hal hadn’t been such a one-note ass? Maybe, but I think that it wouldn’t have been nearly as much fun.