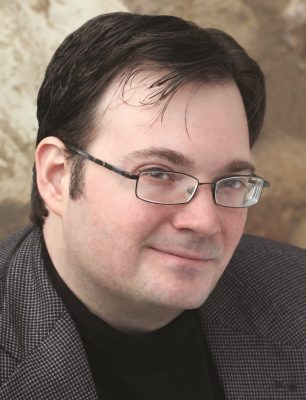 Sanderson’s Dark One will be a TV series, graphic novel and a series of ‘supplementary, multi-volume books that will expand on the storyline from the show and further explore subsidiary characters.’

Burbank, CA (June 11, 2018) – FremantleMedia North America (FMNA) with Random House Studio today announced a milestone partnership with best-selling fantasy novelist Brandon Sanderson. The author is taking the Dark One property to a new level and making it a true multi-media experience – not only spanning the small screen with the TV series, but he’s concurrently creating a graphic novel that will be published by Vault Comics. Sanderson’s also penning a supplementary, multi-volume book series that will expand on the storyline from the show and further explore subsidiary characters. Additionally, fans will be able to enjoy his master storytelling through the Dark One podcast where it will shed further light on the incidents leading up to where the TV series will begin.

“I’m used to painting a picture in words. Dark One came to life when I freed myself to think of it as a project for actual visual media, with the setting, characters and outline all coming together,” said author Brandon Sanderson. “I’m excited to be able to partner with FremantleMedia North America and Random House Studio on this for television.”

“Brandon Sanderson is a powerful storyteller and one of the world’s most admired fantasy writers,” said Dante Di Loreto, president of scripted entertainment, FremantleMedia North America. “The narrative of Dark One will examine the dual roles we often take on in life – the ability to be a savior as well as a destroyer, and this innovative creative partnership with Brandon will serve as a catalyst for deepening the connection between him and his many fans.”

“Brandon Sanderson is one of the most exciting storytellers within the enormous group of authors published by the Penguin Random House group,” said Peter Gethers, executive vice president and general manager, Random House Studio. “We are thrilled to be working with him to create one of his extraordinary worlds for a television audience for the first time.”

Sanderson’s previous books have taken place in fantastical worlds which encompass an intricate system of magic driving the plots. They have graced the New York Times best-seller list six times, including his most recent release, Oathbringer, which debuted at No. 1 when it was published in November of 2017. Garnering numerous honors, including a coveted Hugo Award for his 2012 novella The Emperor’s Soul, his works have widespread appeal within the global fantasy community, have been translated into more than 35 languages, and have sold over 12 million copies.

About Brandon Sanderson
Brandon Sanderson has worldwide sales approaching 13 million copies and multiple #1 NY Times bestsellers among his myriad appearances on the NY Times, Sunday Times of London and other international bestseller lists, making him one of the world’s top-selling fantasy authors. Sanderson’s work has been translated into over thirty-five languages, and he is best known for the instant-classic Mistborn trilogy, the epic Stormlight Archive fantasies, and the Reckoners YA trilogy. The recipient of multiple awards, most notably the Hugo Award for his novella The Emperor’s Soul, Sanderson lives in Utah, where he teaches creative writing at Brigham Young University. Dark One is his first original concept for television. MGM, DMG Entertainment and Fox/21 Laps all have projects in development for feature films. Visit him at brandonsanderson.com, and @brandsanderson on Facebook/Twitter/Instagram. Sanderson is represented by Debbie Deuble Hill and Steve Fisher at APA, Joshua Bilmes at JABberwocky, and attorney Matt Sugarman at Weintraub Tobin.