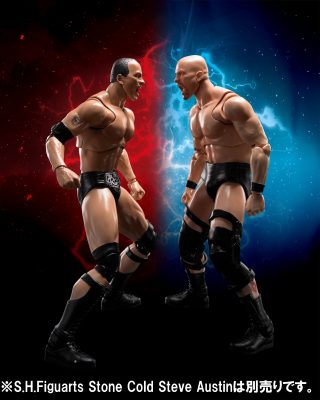 If you can smell what The Rock is cooking, then the new line of S.H. Figuarts WWE Wrestling Superstars from Tamashii Nations might be of interest to you.

Upcoming figures include  “The Brothers of Destruction” Undertaker and Kane—available for pre-order now. Read on for complete galleries (double click to embiggen).

The Rock, Stone Cold Steve Austin and Triple H are the Latest S.H. Figuarts Releases with Undertaker and Kane Set for July

Tamashii Nations’ new 6-inch wresting figures are their first products developed for the WWE Universe. The figures are fully poseable with over 30 points of articulation and each figure makes use of Tamashii’s proprietary Digital Color Technology on the head sculpts, resulting in portraits with an uncanny lifelike resemblance to the WWE superstars.

Can you smell what the Rock is cooking? S.H. Figuarts is proud to present the action figure for America’s top WWE wrestler: The Rock. This 6.25″ (16cm) figure brings all of S.H. Figuarts technology has to bear to replicate the wrestler in all his glory. The Rock includes three heads with different expressions, one pair of posable hands, three pairs of fixed-pose hands, and a microphone.

Here’s the bottom line, ’cause Stone Cold says so! S.H. Figuarts is proud to present the action figure of one of America’s top WWE wrestlers: Stone Cold Steve Austin. This 6.25″ (16cm) figure brings all of S.H. Figuarts technology has to bear to replicate the wrestler in all his glory. Stone Cold’s figure includes three heads with different expressions, two pairs of posable hands, a vest, two cans, and two “splash effect” parts.

The king of kings, Triple H, joins the S.H.Figurarts series as he appeared in the late 1990s. Full action gimmicks and posing let you replicate all his trademark moves! The 160mm figure includes two optional expression parts, optional left and right hands, left and right hands with posable fingers, sledgehammer, and water bottle.

From out of the shadows comes the latest addition to the S.H.Figuarts WWE line, the ominous  Undertaker! Undertaker is meticulously realized in 6-inch scale with strategically placed joints for ultimate articulation. Set includes his iconic hat, interchangeable right hand, jointed interchangeable hands (left and right), and interchangeable heads (x3).