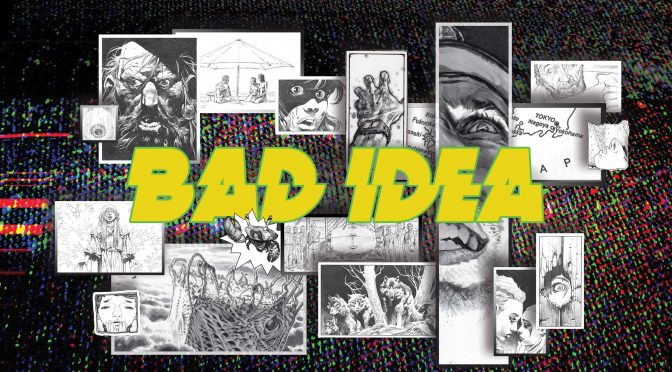 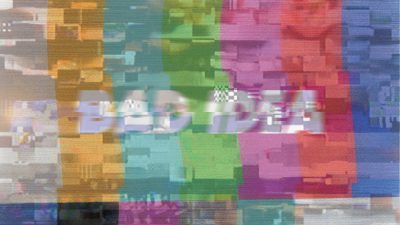 But, wait, we’ll get to the “select” part in a second.

BAD IDEA’s mantra is “don’t do anything unless it’s special.” That could apply to the way we appear at conventions, it could be the way we get books into stores, but, more often than not, you’ll see it first and foremost in our comics. With that in mind – and in spite of ourselves – BAD IDEA is going to produce an intentionally limited number of series at any given time: no more than one to two single issues per month. Single-issue, monthly comics are the fuel that keeps BAD IDEA’s engine running – and, over the past year, we’ve been making a ton of them in secret with some of the industry’s best and most respected creators.

It’s been a blast so far…and we’re just getting started. 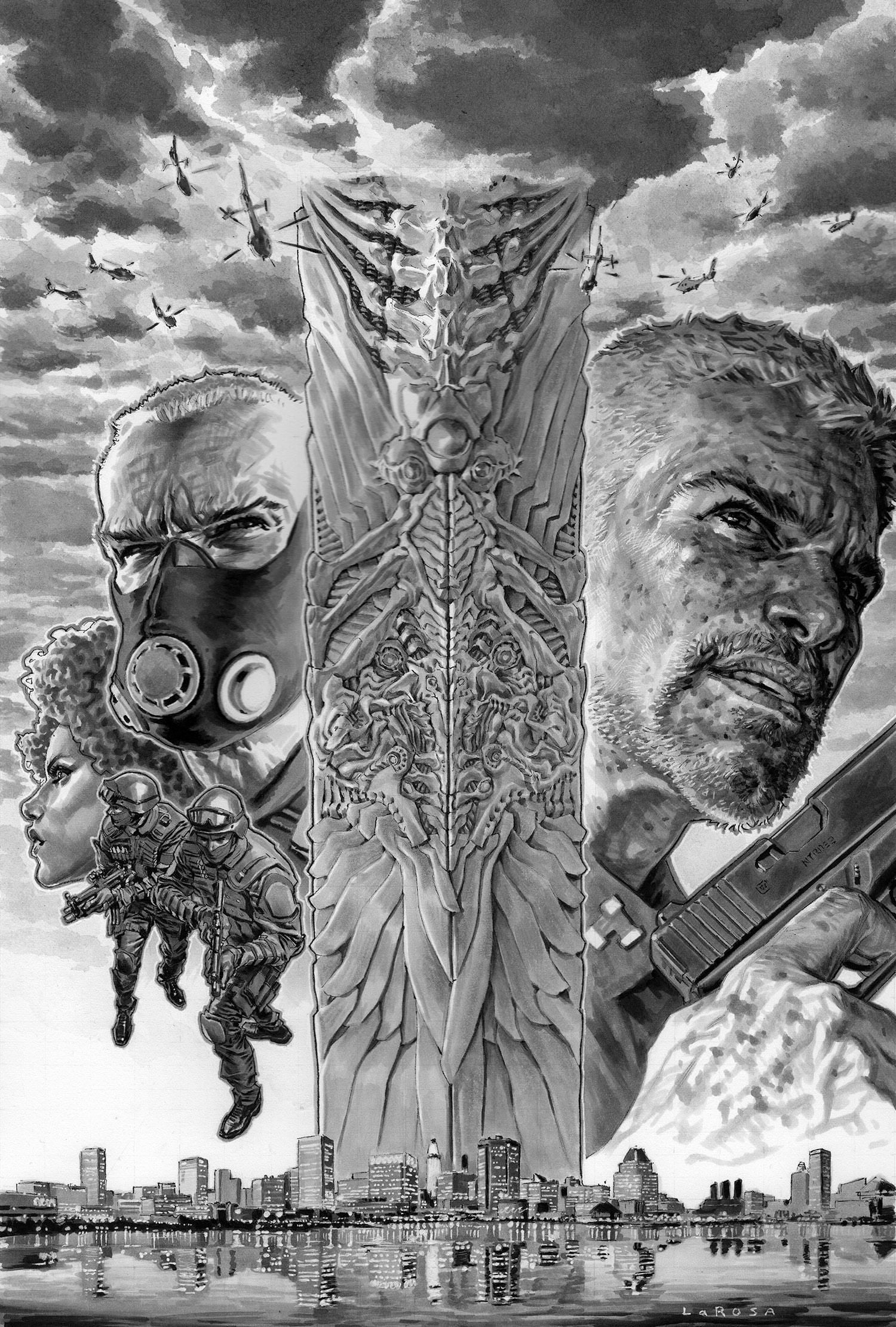 An advance look at Lewis LaRosa’s cover art to MEGALITH #1 – coming soon from BAD IDEA
Each BAD IDEA comic will feature A-level comics storytelling from some of the medium’s leading talents in a pristinely designed, prestige-format package. Some – usually our first issues or totally mind-blowing one-shots – will be oversized with page counts far in excess of the standard 22 pages. A few others might even come stealthily loaded up with hidden features and other surprise bonuses so secret we might never even mention them in public. But, no matter what, each BAD IDEA comic will have a standard $3.99 cover price. And our goal is to make sure that each time a new one shows up in your local comic shop, it’s kind of a big deal.

Here’s why: BAD IDEA’s titles will feature no variants, will not be offered digitally, and will not be collected into trade paperbacks, hardcovers, or other bookshelf formats.

You will have to go to a comic shop to buy them, each and every month.

We’re not going to tell you everything about all of our new comic series up front because, well, we don’t want to spoil the fun all at once. But we can say this…

But here’s the rub: BAD IDEA’s new releases won’t be available everywhere. To get things going, BAD IDEA will be self-distributing its titles to a carefully selected roster of just 20 participating comic book retailers with more admitted on a rolling basis for a total of roughly 50 within the first year.

Each BAD IDEA store will qualify to participate based on a unique system of criteria that includes enhanced signage, promotional displays, and rules for stocking and selling BAD IDEA releases, including a strictly enforced “limit one per customer” policy on all BAD IDEA comics. Retailers who wish to apply directly can email BAD IDEA’s customer service team at hello@badideacorp.com.

We’ll be posting even more crazy stuff online soon at BadIdeaCorp.com. Sign up for updates and whatnot here.

###
About Dinesh Shamdasani
An experienced entrepreneur and entertainment executive, Dinesh Shamdasani spent more than a decade spearheading the rebirth of Valiant Entertainment as the company’s CEO & Chief Creative Officer. During his time at Valiant, Shamdasani led the iconic comics brand through a groundbreaking run of creative, commercial, and critical successes that culminated with the company’s sale in early 2018 and the start of production on Valiant’s first-ever feature film: Bloodshot, starring international superstar Vin Diesel and directed by David S.F. Wilson from a script by Academy Award-nominated screenwriter Eric Heisserer. Most recently, Shamdasani co-founded Hivemind, the Los Angeles-based production company behind Amazon Studios’ acclaimed sci-fi series The Expanse and Netflix’s hugely successful adaptation of The Witcher, starring Henry Cavill. He is currently producing the Bloodshot feature film for Sony Pictures and the first live-action adaptation of Square Enix’s iconic Final Fantasy video game franchise, as well as a new television series based on Gideon Falls, the Eisner Award-winning comic book series from creators Jeff Lemire & Andrea Sorrentino. In tandem with Simons, Shamdasani will serve as Co-CEO & Co-Chief Creative Officer of BAD IDEA.
About Warren Simons
An entertainment executive with over two decades of experience building award-winning works for Marvel and Valiant Entertainment, Simons has revitalized some of the industry’s most iconic characters, spearheading titles that have garnered more than 500 awards, nominations, and critical citations.  Simons oversaw some of the 21st century’s most acclaimed series, including Eisner Award-winning and nominated runs on Invincible Iron Man (with creators Matt Fraction and Salvador Larocca), Immortal Iron Fist (with creators Matt Fraction, Ed Brubaker, and David Aja), Daredevil (with creators Ed Brubaker and Michael Lark), and Thor (with creators J. Michael Straczynski and Olivier Coipel). Simons became a founding member of the Valiant Entertainment executive team in 2010, re-architecting the largest independently owned superhero library in comics as Editor-in Chief and being named USA Today’s MVP of the comic-book industry in the process.  During his transformative tenure at the publisher’s helm, he led the redevelopment of the company’s biggest franchises – including X-O Manowar, Bloodshot, Harbinger, and Faith – and oversaw the creation of dozens more. In tandem with Shamdasani, Simons will serve as Co-CEO & Co-Chief Creative Officer of BAD IDEA.
About Hunter Gorinson
Gorinson currently serves as Senior Vice President of Brand & Content Strategy for Hivemind, the Los Angeles-based production company behind Netflix’s The Witcher, Amazon’s The Expanse, and Lionsgate’s hit Scary Stories to Tell in the Dark feature film. Gorinson is currently producing multiple projects for film and TV, including Weird Fantasy, a new series based on the subversive science-fiction stories of EC Comics; and Illuminatus!, the first television adaptation of the celebrated and influential conspiracy thriller trilogy by authors Robert Anton Wilson & Robert Shea. Formerly a founding member of the executive team at Valiant Entertainment alongside Shamdasani and Simons, Gorinson co-architected the media, publishing, and marketing strategy behind Valiant’s award-winning resurgence and played in a key role in restoring Valiant’s legacy and dominance as one of the most successful publishers in the history of the comic book medium. Gorinson will serve as the Publisher of BAD IDEA.
About Joshua Johns
Johns currently serves as Director of Digital Marketing at Hachette Book Group for James Patterson, the world’s bestselling author, managing the consumer marketing for Patterson’s highest profile releases. Formerly, Johns was Director of Digital Media and Development at Valiant Entertainment, creating and overseeing the company’s social media presence and digital identity, shaping the award-winning publisher’s marketing and communications strategy, and restoring Valiant to the forefront of the comics industry. A University of Georgia graduate, Johns will serve as Director of Marketing for BAD IDEA while maintaining his position with the Hachette Book Group.
About Atom Freeman
Freeman’s marketing and sales consulting company, Prana: Direct Market Solutions, services publishers, retailers, and vendors of all sizes throughout the comics industry. A former comic book retailer himself, Freeman received the prestigious Eisner “Spirit of Retail” Award and previously served as Vice President of Sales & Business Development for ComicHub and Vice President of Sales for Valiant Entertainment.