The basics: Tony Stark/Iron Man (Robert Downey Jr.) and Dr. Bruce Banner/Hulk (Mark Ruffalo) create what Tony has figured would be the ultimate safeguard against aliens/others from beyond our world from destroying it. That would be Ultron (James Spader), a sentient robot who, once he decides that humanity is the world’s actual worst enemy, decides to create an extinction event and let the world start from scratch once more (he actually cites Noah).

The film opens with the Avengers shutting down Baron Strucker’s (Thomas Kretschman) Hydra operation in Sekovia – a tiny nation that isn’t anywhere special but is on the way to everywhere special (to paraphrase Cobie Smulders’ Maria Hill).

Because Strucker doesn’t give a damn about collateral damage (like, say, Sekovians), the team has to spend as much time saving Sekovians as taking down Strucker – which gives twins Wanda and Pietro Maximoff (Elizabeth Olson and Aaron Taylor-Johnson the opportunity to mess with them.

Pietro dazzles Hawkeye by catching an arrow in midflight and thumping the Avenger, while Wanda uses her abilities to put the others into waking nightmare scenarios. Regaining consciousness, Hawkeye gets to be the hero – and gets the best line of the opening act, ‘Mind control. Not a fan.’

The alien OS that kickstarts Ultron comes from Loki’s sceptre, which the Avengers took from Strucker’s castle. 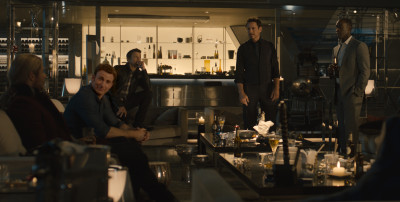 Once Ultron is created and goes FUBAR, the action level goes to eleven but, while most of it is great fun, it’s the moments of character development that keep it from becoming too much.

Even before Ultron is created, though, we gain some insights into our heroes – the scenarios in which they find themselves (thanks to Wanda) allow us to see one (or more) of their deepest fears.

During the party to celebrate finishing of Hydra, the guys – refusing to believe that worthiness has anything to do with Thor being able to wield his hammer – try their hands at lifting it. Only Cap even (barely) gets it to move – but it’s enough to give Thor pause (and sets up a key moment later).

Writer/director Joss Whedon once again manages to balance the need for big superhero action with key bits of character detail (Hawkeye does not have a girlfriend!) and never lets his massive undertaking get too unwieldy. Even the action sequences showcase character. And a Banner/Romanoff romance? Genius! (‘Perhaps we are both monsters.’)

Although this version of Ultron has an entirely new origin, the creation of the android Vision (Paul Bettany, who has voiced J.A.R.V.I.S. throughout the Marvel movies) – who will become an Avenger – is faithful to the comics version in a way.

Ultron turns out to be a wonderful villain, in part because Spader’s voice work and motion capture performance are superb, and because he truly wants what’s best for the planet – if that doesn’t include humanity, well that’s not his fault.

Naturally, Age of Ultron also has to lay the foundations for upcoming Marvel movies in general and Captain America: Civil War aand the two-part Infinity War in specific, but most of those foundational moments are woven into the movie smoothly and don’t detract from the experience in the moment.

There are, undoubtedly, discussions to be had about the film in terms of politics – like the first Avengers film, Age of Ultron has something for liberals and conservatives (small and capital lettered or not) – but what should be of the utmost importance is whether the film is fun or not.

In the end, Whedon offsets the loss of ‘that new car smell’ with cool new characters; increased character development and plenty of twists. Overall, the new stuff, while cool, is not quite enough to completely balance the pure joy at how well the first film worked but it comes so very, very close.