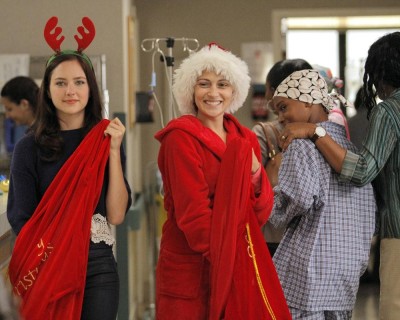 Chasing Life has quickly become one of my weekly go to shows and as usual ABC Family has yanked a program off the air with a ridiculously long two and three month breaks. The pauses aren’t as bad now thanks to their 25 Days of Christmas promotion that features holiday themed episodes of all our favorite programs.

Chasing Life has all the elements of shows that could have legs excellent acting, a solid cast and the fact that while it’s primary premise is dark; the show does a nice job of walking the fine line between keeping hope alive and not harping on the cancer angle. The show doesn’t leave me feeling gutted every week. There’s a small sense of optimism. My only concern is how do they turn a high concept show like this into a long running series? 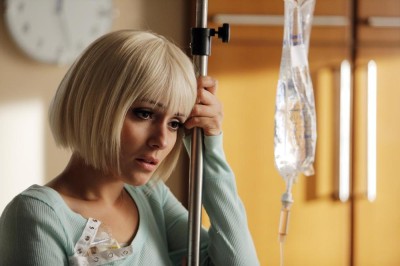 Series star Italia Ricci does an amazing job of hitting all the different emotional notes throughout the show and does bald with a nice quiet dignity, that could have easily have been overwrought with drama. Once April accepts that her hair is falling out she takes control of the only thing in her life she does have control over. It is a nice moment.

None of the characters feel like throwaways and so far all of the primary players have already gone on really nice journeys of self-discovery and growth. I especially love what they’ve done with Brenna (Haley Ramm). She started off being an unlikable, spoiled, one-dimensional brat to having a lot of layers. While April is the “showier” role, Ramm has done an amazing job showcasing her softer, more protective side. 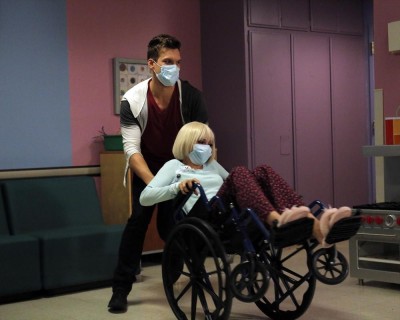 The Christmas special picks up where the fall cliffhanger left off. April’s cancer buddy Leo (Scott Michael Foster) has decided to get the brain surgery and she is still undergoing chemo. Now that she’s almost done, the negative side effects are settling in, including losing her hair. For no apparent reason, since her grandparents are in town, her family decides to celebrate the end of her chemo by having Christmas in July. 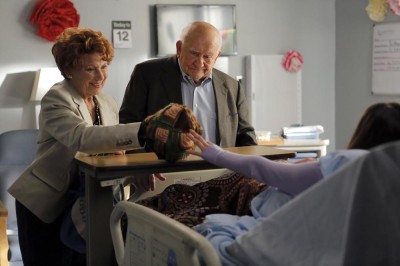 As usual, when Grandparents (played by Marion Ross and Ed Asner) come to town, long festering issues surface. They of course think they know what’s best for everyone and attempt to take control, much to the annoyance of sister Brenna, her mom Sara (Mary Page Keller) and Uncle George (Steven Weber).

Brenna doesn’t know how to tell them that she’s bi-sexual and has a girlfriend, while George’s parents complain about him not having a family or any prospects he and Sara are trying to hide their affair/attraction. Their gung ho attitude even starts to irritate April. Things come to a boil during their X-Mas dinner.

I’m noticing a theme to all of these ABC Family holiday episodes. Anyone notice how lots of wine flows on television shows? Maybe if they cut back a bit, there wouldn’t be so much drama and secrets shared in mixed company at the dinner table. Just a thought. I wish I had a taste for the grape bubbly. 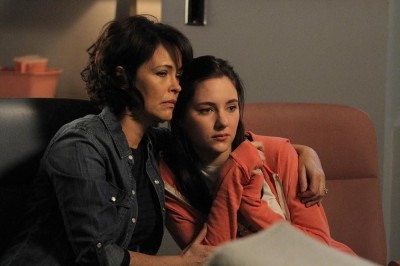 The hospital bans Sara from visiting because she has a cold. Dominick is shown for all of two minutes whining to his roommate that April lied to him and didn’t give him a proper chance.

Other than Leo getting the operation, not much else happens that drives the story along. We don’t find out whether the chemo worked or not, nor do we discover whether the illegitimate daughter is going to play a role, although they the Grandparents admitted that they’ve known about her all along. While not much happens here, it was nice peaking in on the characters before things inevitably start going south for April when it returns in January and doesn’t make the break feel so long.