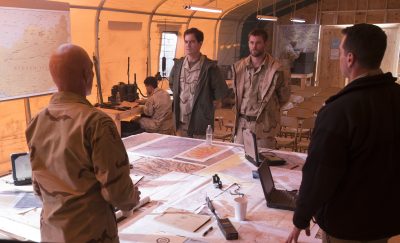 12 Strong (based on the book Horse Soldiers, a vastly superior title) is The Green Berets for today (that is not a compliment) – with Chris Hemsworth starring as John Wayne.

After the attack on the World Trade Center, Captain Mitch Nelson (Chris Hemsworth) and his team of twelve, is sent into Afghanistan to help General Abdul Rashid Dostum’s Northern Alliance of Afghan fighter to take Mazar-i-Sharif – a town that controls access the north.

The fact that Nelson’s team of twelve did take Mazar-i-Sharif in 21 days – with the help of General Dostum – is considered one of the great military victories (Al Qaeda is said to consider it their greatest defeat) – is the reason it’s been made into a movie.

What makes the story incredible is that they fought on horseback against very modern weaponry and won – through a combination of improvisation and sheer bullheadedness. 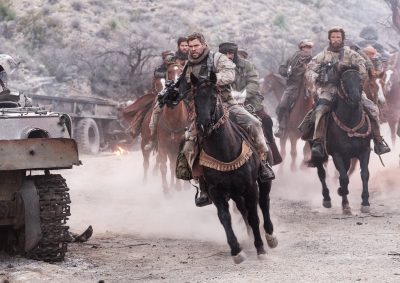 12 Strong opens with the attack on the tower and the men of Nelson’s unit (or at least the ones played by Hemsworth, Michael Shannon and Michael Peña) saying goodbye to their families. This is a quick montage that doesn’t give any depth of character to either the soldiers or their families.

Then they’re off to Afghanistan – singing The Ballad of the Green Berets from the John Wayne film. It’s a case of being too much on the nose.

In Afghanistan, Nelson (who is the only man on his team who has never seen combat) persuades his commander (a completely unrecognizable William Fichtner) that his team should be the one to take on the mission – by telling it like it is, objectively and thoroughly.

They can count on air support by B-52 bombers that will drop bombs on targets from coordinates given them from the ground.
Once they’ve landed and geared up, they’re off – meeting General Dostum (Navid Negahban, Homeland) only after going through a couple levels of security. 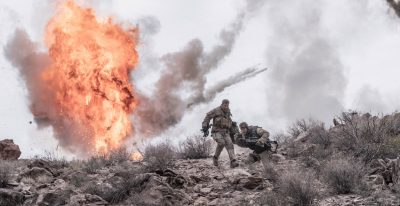 Then comes the series of small victories against superior forces through judicious use of their air support and the use of good ground tactics – and in the case of taking Mazar-i-Sharif, some first-class diplomacy (General Dostum learns the leader of another Afghan militia are is likely to arrive before him and threatens to quit).

Nothing in 12 Strong is a secret – the book on which the film is based was published the instant the action was declassified in 2009 – so detailing the events of the movie doesn’t actually qualify as spoilers: we know Nelson’s men fought alongside General Dostum (despite only one them, Nelson, being a rider prior to their working together) an we know they took Mazar-i-Sharif in 21 days (when told it would take twice that long).

We also know that the horse soldiers won one of the few battles in the War on Terror – and this is only one area in which 12 Strong fails.

Despite seeing glimpses of the certain of Nelson’s team saying goodbye to their families, we really don’t know anything about their characters – or their families. Despite tokens bits (singing The Ballad of the Green Berets; joking around before their assignment; small bits of personal chatter during the incursion), we know next to nothing about the men on Nelson’s team (like the guy wearing glasses, for example).

The action sequences (and they are many) are well choreographed and the bombing sequences are spectacular. Hemsworth is John Wayne solid as Captain Mitch Nelson – though he’s given little to work with – and Michael Shannon’s Warrant Officer Hal Spencer is determined and loyal. That, however, is all we really learn about them.

Poor Michael Peña is reduced to being token Latino and occasional cracker of bad jokes.

And finally, the film has no context. Based on just the film, we could be led to think that the U.S forces – in conjunction with the Afghan militias – breezed through the country, knocking off Al Qaeda and Taliban strongholds at will. Which, of course, did not happen.

Basically, if you love to see stuff blowed up real good, you will enjoy 12 Strong. If you’re looking for a Rah-Rah America movie that doesn’t require any thinking on your part, you’ll enjoy this.

If you’re looking for anything more than a superficial movie that is competently made but lacking in character development or any kind of historical context (not even a line or two in the pre-credits historical notes), then this is not your movie.