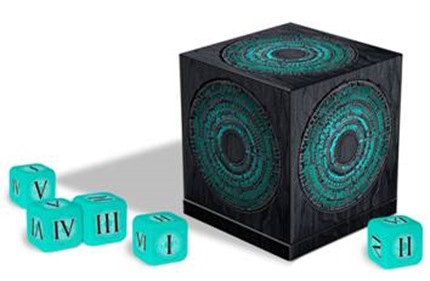 Some things are just too cool for words so, I give you the YAHTZEE Doctor Who Pandorica Edition landing exclusively at Comic-Con 2014. Color me envious!

For details, follow the jump. I’m going to bed to weep silently into my pillow… 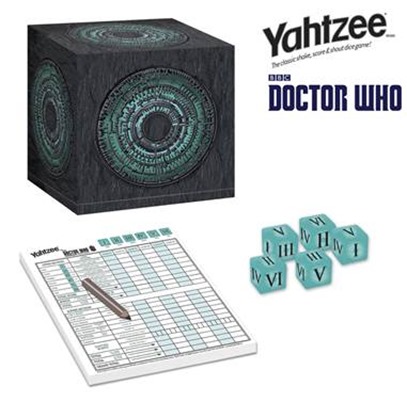 “We are very excited about this collaboration and we believe this exclusive game is a perfect fit for Doctor Who fans,” says John M. Davis, President, USAopoly, Inc.

Soumya Sriraman, EVP of Home Entertainment and Licensing for BBC Worldwide North America, says “USAopoly has been an incredible partner, releasing Doctor Who branded games like MONOPOLY, RISK and YAHTZEE, which have brought fans hours of fun. We’re excited that our collaboration continues to grow and to launch an exclusive game for Comic-Con International: San Diego 2014.”

YAHTZEE: Doctor Who Pandorica Edition will only be sold at Comic-Con International: San Diego 2014 convention, available exclusively in the BBC AMERICA booth (#4129) on preview night, and then in the BBC America booth and the USAopoly booth (#1017) for the rest of the convention. It will retail for $20.00 (limit two per customer).

YAHTZEE and RISK are trademarks of Hasbro and used with permission.

BBC Worldwide is the main commercial arm and a wholly-owned subsidiary of the British Broadcasting Corporation (BBC) operating in the U.S. and Canada.  The company exists to maximize the value of the BBC’s assets for the benefit of the UK license payer and invests in public service programming in return for rights. The company operates channels, a production arm, consumer products and a digital business, in addition to handling sales & co-productions. Under these businesses fall two key brands in the U.S. – digital cable channel BBC AMERICA and BBC Worldwide Productions, the production arm responsible for the smash hit Dancing with the Stars.

Creating popular board games since 1994 USAopoly, Inc. is a leading specialty market game manufacturer offering the world’s best-known games  (licensed from the Entertainment & Licensing Division of Hasbro) and an innovating game developer of original games including Telestrations®, Tapple™, Treasure Trax™, Reverse Charades®, CrossWays™ and Ratuki®. For more information about all USAopoly games, visit our website: usaopoly.com.

Hasbro, Inc. (NASDAQ: HAS) is a branded play company dedicated to fulfilling the fundamental need for play for children and families through the creative expression of the Company’s world class brand portfolio, including TRANSFORMERS, MONOPOLY, PLAY-DOH, MY LITTLE PONY, MAGIC: THE GATHERING, NERF and LITTLEST PET SHOP.  From toys and games, to television programming, motion pictures, digital gaming and a comprehensive licensing program, Hasbro strives to delight its global customers with innovative play and entertainment experiences, in a variety of forms and formats, anytime and anywhere. The Company’s Hasbro Studios develops and produces television programming for more than 180 territories around the world, and for the U.S. on Hub Network, part of a multi-platform joint venture between Hasbro and Discovery Communications (NASDAQ: DISCA, DISCB, DISCK). Through the company’s deep commitment to corporate social responsibility, including philanthropy, Hasbro is helping to build a safe and sustainable world for future generations and to positively impact the lives of millions of children and families every year. It has been recognized for its efforts by being named one of the "World’s Most Ethical Companies" and is ranked as one of Corporate Responsibility Magazine’s "100 Best Corporate Citizens." Learn more at www.hasbro.com.