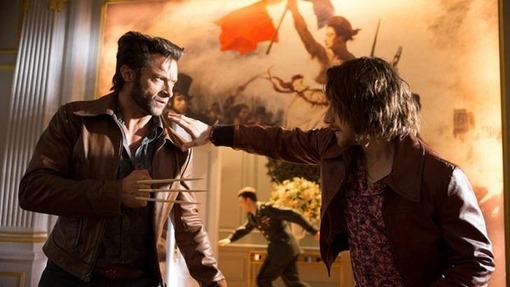 The film opens on a future New York that is devastated. A group of X-Men – including Sunspot (Aden Canto), Blink (Fan Bingbing) and Kitty Pryde (Ellen Page) – are facing off with giant robots that adapt to their fighting skill and powers. It does not go well, but a few are teleported to safety (relatively speaking) by Blink – whose ability to teleport is a kind of two-step process: a pink-rimmed portals opens and the mutants jump through it. It’s pretty frikkin’ cool!

The X-Men that are left in the world stay one step ahead of the Sentinels, as they are called, by using a variation on Kitty’s ability to phase through objects that allows one of them to travel back through time, mentally, to their younger self and avoid the Sentinels attack by not being there in the first place. The drawback has been that she could only send them back a few hours – but it takes a physical toll on the person in the present until the past is changed. Yup. Wibbly-wobbly, timey-wimey stuff. But fear not, for your head will only hurt for a few seconds. 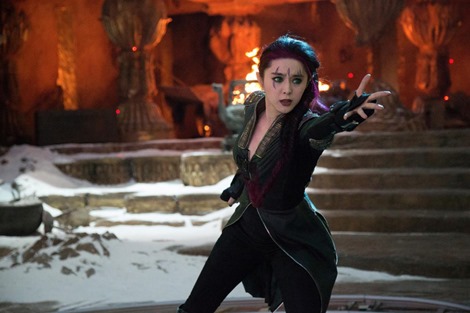 Future Logan/Wolverine (Hugh Jackman) suggests that his healing factor should make it possible for Kitty to send him back to 1973, and prevent the event that set this future on its fatal course (you can tell it’s future Logan by the discreet bits of gray at his temples). Charles Xavier (Patrick Stewart) and Erik Lensherr (Ian McKellan), who are once again friends and working together, think this might work – and so it’s done.

Logan wakes up in bed with a beautiful woman and has figure out where he is and what he has to do – while taking care of a minor annoyance. Once he’s oriented himself, he heads to Westchester where he finds Xavier’s mansion closed and Charles walking – but at the expense of his mental powers. He has to persuade Charles and Hank McCoy (Nicholas Hoult) that Raven/Mystique (Jennifer Lawrence) is about to kill a scientist named Bolivar Trask (Peter Dinklage) and that that will set off a very, very bad future.

They will also need the young Erik (Michael Fassbender) but, there’s a hitch: he’s imprisoned in a special cell a hundred and fifty feet beneath the Pentagon. But! Logan has a plan – involving a young Peter Maximoff (Evan Peters), the mutant who will become known as Quicksilver. From there, things proceed in highly entertaining ways to a climax that decides the future. 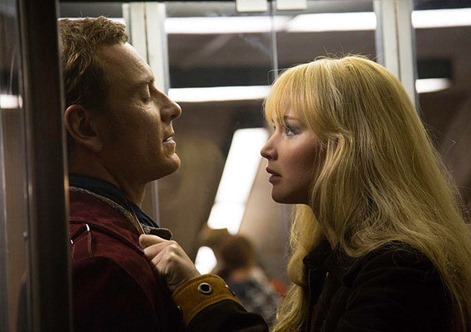 As is the case with all superhero movies, the end point is usually not in doubt. What makes them fun is seeing how they get there – and what costs are incurred along the way. It’s the human hearts under the super exteriors that determine if the movie works – however well it might be plotted.

X-Men: Days of future Past gives us a look at what makes the main characters worth cheering for – Logan’s passion; Charles’ compassion; Hank’s loyalty. These are a small part of a larger story, but without them it would be pointless fights and explosions and stuff.

Kinberg and Singer understand that and give emotional beats as much time as they need to give the audience reason to invest itself in them. Then they kick out the jams and let slip the dogs of war and so on. Not only that, but they take the ‘and so on’ and spin it in fun, new ways – like the way they utilize Blink’s ability (very cinema friendly – very cool in 3D), and the way the Sentinels operate (the way Trask gives them that adaptability is cool, if a bit wibbly-wobbly on the DNA side of things, but it works). 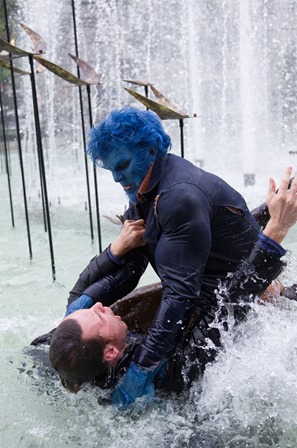 As with the best Marvel comics and movies, the villain is not just a villain. Trask compares humans and mutants to Neanderthals and early Homo sapiens – suggesting that what happened to the Neanderthal will happen to humanity unless they are stopped. His fear is that of extinction – though he does admit to admiring and even envying mutants for the things they can do.

In terms of the production, Days of Future Past is magnificent, visually. The effects range from minor to holy $#!+ – did he just move a ball park with his mind? Singer’s direction, has been suggested above, does the seemingly impossible job of juggling dozens of characters through two time periods and many character arcs – while never neglecting or diminishing the emotional heart of the story. He, and the movie, earn the well thought out reset.

As for the closing credits tag, it’s very impressive, visually, but I stopped reading coming before the point at which it would familiar to me. I’m guessing it plays into Age of Apocalypse, but it really doesn’t matter because it is intriguing enough to make me curious about the next X-Men film – so, mission accomplished.

Overall, I have to say that if you enjoyed X2, or X-Men: First Calls, you will enjoy this at least as much. I think The Winter Soldier was a marginally better film, but X-Men: Days of Future Past entertains like gangbusters.