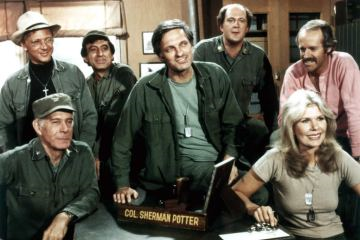 WGN America will air a 19-hour M*A*S*H marathon beginning at 9 am (8C) on Saturday, December 9th.

PUT A HOLD ON YOUR WEEKEND PLANS!

WGN AMERICA IS BRINGING YOU A ‘M*A*S*H-ATHON’
With 19 STRAIGHT HOURS OF YOUR FAVORITE ‘M*A*S*H EPISODES BEGINNING SATURDAY, DECEMBER 9

LOS ANGELES, CA, December 7, 2017 –WGN America will kick-off the holiday season with all the nostalgia you can handle in a M*A*S*H-athon” beginning Saturday, December 9 at 9:00am ET /8:00am CT. The programming block will feature 19 hours of fan-favorite episodes of the beloved TV series.

M*A*S*H, one of the highest rated television series of all time, follows a team of doctors and key personnel stationed in South Korea during the Korean War. Created by Larry Gelbart and Gene Reynolds and based on a book by Richard Hooker, the series was regarded for its social commentary on patriotism, duty, war and peace. During its 11 season run, it garnered eight Golden Globes, 14 Emmy® awards and a Peabody award, among others.