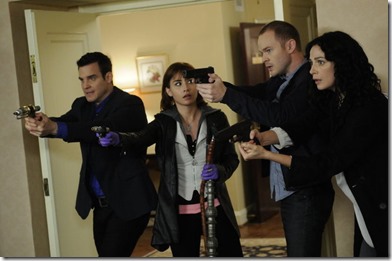 Warehouse 13 is snagged, bagged and about to be tagged. One of Syfy’s most popular shows ever, the thrilleromedy (as its perpetrators fondly refer to it) will return for a shortened six-episode fifth and final season in 2014.

NEW YORK – May 17, 2013 – Syfy today announced that its long-running flagship series Warehouse 13 will return for a fifth and final season of six episodes in 2014.

A production of Universal Cable Productions, Warehouse 13 will begin filming in Toronto this summer.

Said Mark Stern, President, Original Content, Syfy, and Co-Head, Original Content, Universal Cable Productions: “Warehouse 13 has been an incredible signature series for us.  We are grateful to the loyal and passionate fan base and know that Jack Kenny, his gifted creative team, and outstanding ensemble cast will give them an amazing finale season.”

Photo by Steve Wilkie/Courtesy of Syfy.