Entertainment News for The Rest of Us
Sheldon Wiebe
Television, Video Games 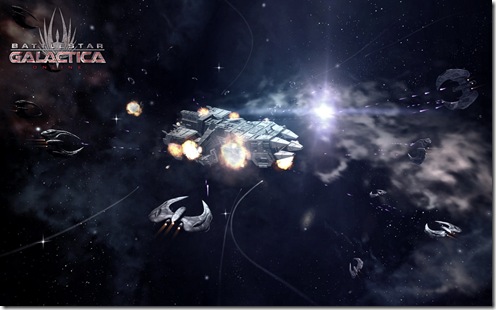 If you’ve been awaitng the debut Battlestar Galactica Online – the MMOG based on Syfy’s groundbreaking TV series, mark February 8, 2011 on your calendars. Why? Read on…

NEW YORK – February 2, 2011 – Players eagerly awaiting Battlestar Galactica Online, the highly anticipated space combat MMOG from Bigpoint (www.bigpoint.com/), can get a ‘jump’ on the competition and be the first to launch a Colonial Viper or Cylon Raider by visiting Syfy.com and Syfy.co.uk where the open beta for the new game will be available exclusively for one week only beginning Tuesday, February 8th*. Also available to players only at Syfy.com – and international Syfy Universal websites – are a frakkin’ awesome set of Syfy-inspired Viper and Raider designs, which players can choose to represent them in the on-going battle between the Colonial and Cylon fleets.

In Battlestar Galactica Online, both the Colonial and Cylon fleets find themselves stranded in an unexplored area of space at the very edge of one of the galactic arms. Heavily damaged and critically low on resources, both fleets race against time to repair and rearm, struggling for control of systems rich in Tylium, metals and water. The Colonial fleet desperately searches for a way to escape and continue the search for Earth before the Cylons gain enough strength to destroy them once and for all.

In developing Battlestar Galactica Online, achieving the highest level of detail and accuracy was a design requirement. Assets from the television series have been incorporated into the game, including non-player characters (NPCs) based on popular characters Number Six, Boomer, Starbuck, Admiral Adama, Chief Tyrol, John Cavil, and Leoben Conoy. In the game, players can customize their human or Cylon avatars, engage in PvE and PvP space combat, complete missions, conduct mining operations, and explore capital ships, outposts, and bases.

About Bigpoint
Bigpoint (www.bigpoint.com) is an online-game publisher, content provider for large media concerns and browser-based game developer. Bigpoint-developed games are played by over 170 million people in more than 25 languages, are free to play anytime, anywhere, and require no download or installation. The company’s portfolio includes games in a quality which until now was associated exclusively with console games or PC-installed games. More than 700 employees from over 35 different nations work at the company headquarters in Hamburg, Germany or at other locations in Berlin, San Francisco, and Malta. For more information or press material, please visit the press area at www.bigpoint.net.