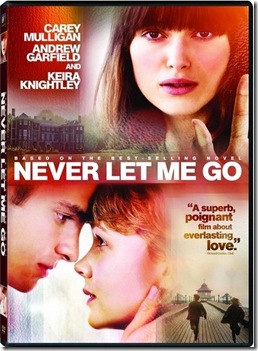 Mark Romanek’s Never Let Me Go, based on the novel by Kazuo Ishiguro, is a measured, beautifully shot science fiction tale that neither looks or feels like science fiction. It is a melancholy reflection on what makes us human – explored through the lives of three special children who have attended a classic British boarding school. If Merchant Ivory had made a science fiction film, this is what it would have looked like.

Never Let Me Go opens with graphics explaining that the medical breakthrough occurred in the early 1950s and by the 70s, the average life expectancy had passed 100. Fade in Kathy [Cary Mulligan] talking about being a ‘carer’ as she watches a young man being prepared for surgery. Cut to…

When we meet young Kathy [Isobel Meikle-Small], Ruth [Ella Purnell] and Tommy [Charlie Rowe], they are students at Hailsham School – a classic British boarding school. They wear uniforms that look a bit more used than you’d expect – possibly hand-me-downs – but are otherwise indistinguishable from any other boarding school students.

As the first twenty minutes of the film build, we begin to notice other differences – there’s a special emphasis placed on maintaining one’s internal health; upon entering and leaving the classroom areas, each student waves their wrist past a sensor; not only are students forbidden from leaving the school’s grounds, there are horrifying tales in place to emphasize the importance of not straying.

The school is run with not-quite grim efficiency by Miss Emily [Charlotte Rampling] and when young Miss Lucy [Sally Hawkins] tells her class exactly why they’re so special – in terms they can understand – she is swiftly removed from her duties. What does she tell them? Essentially, they are clones who have been grown to donate spare parts for their originals.

Kathy and Ruth are best friends, while Tommy is the boy everyone teases because he is so easy to provoke. After Kathy explains why he gets teased, the three become close and, by the time they leave Hailsham for a place called The Cottages, Ruth [now played by Keira Knightley] and Tommy [Andrew Garfield] are an item and Kathy is a bit of a third-wheel. Throughout, Cathy holds fast to a cassette Tommy gave her at school.

Never Let Me Go is lovely to look at, although the film has a melancholy undercurrent that is emphasized by the use of a cello in its score. In building its characters so deliberately and thoroughly, through Kathy’s narration, Romanek brings us to a state of real empathy. Details – like the art by Hailsham students that is chosen to become part of the mysterious Gallery [and the theories about the gallery’s purpose] – play out in unexpected ways.

The film’s impact is heightened by the remarkable resemblance between the three main child actors and the three adult leads – especially Meikle-Small, whose resemblance to Mulligan is uncanny – and the amazing performances the young trio give. They rise to the same levels of excellence as Mulligan, Knightley and Garfield.

In the end, Never Let Me Go is a movie that explores what it means to be human – if there is such a thing as ‘the soul’ and, if so, how can you tell? It is a quiet, beautiful film that is unsettling simply because it doesn’t pretend to know the answers to these questions, nor does it care to theorize about them.

Kathy, Ruth and Tommy – and the rest of the students at Hailsham – are us in microcosm.