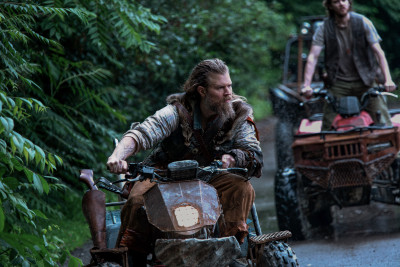 WGN America’s Outsiders – the story of the Farrell clan that has lived on the mountain for over 200 years and is facing eviction from the town below – has had its premiere date set: Tuesday, January 26, 2016 (9/8C).

The network has also released an extended, powerful trailer for the series. Check it our following the jump.

LOS ANGELES, November 13, 2015 –WGN America unveiled today the full-length trailer for its intense and gritty original drama “Outsiders,” and announced the highly anticipated series will premiere Tuesday, January 26 at 9 PM ET/PT.   A struggle of power and control set in the rugged hills of Appalachia, “Outsiders” explores the epic battle between the Farrell Clan, a tight-knit family of renegades who have lived atop the rugged Shay Mountain for over two hundred years, and their fight to defend their way of life from the town below and anyone who would dare to challenge them.

The ensemble cast for “Outsiders” includes: David Morse (“Treme,” “Hurt Locker”) as Big Foster, the gruff and powerful heir to tribe leadership; Thomas M. Wright (“The Bridge,” “Top of the Lake”) as Sheriff Wade Houghton, a cop who has a rough history with the Farrells, and grapples with several troubles of his own; Ryan Hurst (“Sons of Anarchy,” “Bates Motel”), as Lil Foster, a massive mountain man and son of Big Foster; Joe Anderson (“The Divide,” “Across the Universe”) as Asa, a former member of the Farrell clan looking to rejoin the family after a 10-year stint with the outside world; Gillian Alexy (“The Americans,” “Damages”) as G’Winveer, a healer and a survivor, and Asa’s trusted confidante; Kyle Gallner (“American Sniper,” “Veronica Mars”) as Hasil, a young, intuitive soul who feels rejected by the group; Christina Jackson (“Boardwalk Empire,” “Deception”) as Sally-Ann, a beautiful girl from a mining town who is fascinated by the Farrells, and Hasil in particular; Francie Swift (“Hostages,” “House of Cards”) as Haylie, a clever and cunning all-American community relations manager representing the encroaching coal company; and Phyllis Somerville (“The Curious Case of Benjamin Button,” “The Big C”) as Lady Ray, the regal yet tough leader of the Farrell clan.