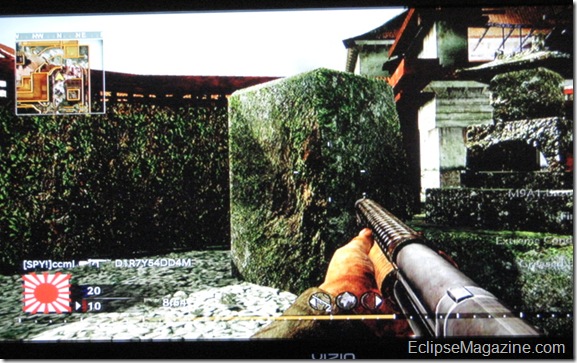 I’ve been playing the new Call of Duty World At War Private beta for the last few days and I’ve come away pretty impressed. Many who read Eclipse know of my love of Call of Duty 2 and 4. I liked the single player campaign in COD 3 but thought Treyarch broke the multiplayer. So I had concerns knowing these guys were making the new version and taking it back to WWII.  This latest installment doesn’t look as pretty as COD 4 but the game play is rock solid.  This isn’t a gimped beta, it includes 3 multiplayer maps and six different core modes including: War, Capture The Flag, Team Deathmatch, something called “Pick Up TDM” which is a Team Deathmatch mode that doesn’t allow parties, Free For All, Search and Destroy. And two modes for the hardcore players Team DM and S&D.  You have several classes to choose from at the start including Rifleman, Gunner and Assault. The RPG elements that made COD 4 a hugely addictive experience has returned. You can unlock different classes like Sniper and modes as you progress.

The maps feel both huge and intimate at the same time. Unfortunately two of them look and feel the same. The problem is they are too dark and pixilated to tell apart.  You get the standard small village that has lakes you can hide in, a bland looking abandoned train depot and a beautiful Chinese Japanese Castle. I don’t like the look of World at War, at all. Graphically the game seems dated. The game play feels rock solid and nothing has changed. You still use your bumpers for your grenades, the blue button still reloads. Even though they have two different developers on the series and jump around in time it still feels the same and that’s a good thing. But there’s no denying that Infinity Ward makes the better, more gorgeous looking game.  I don’t like that they went back to the traditional Capture the Flag game play, where you have to once again carry the enemy flag all the way back to your base. I loved the way it was done in COD 4. They also changed the Search and Destroy mode to a “survival mode” so if you die you have to wait until the end of the match before you can play again – not cool.  Gone is the ability to call in helicopter strikes, it’s been replaced by calling in attack dogs. Somehow not a worthy replacement, but it’s hysterical watching the dogs maul your enemies – not so much when it happens to you. Also new, is your ability to use tanks and other vehicles. I’m on the fence as to whether this unbalances the game.

I wish game developers would figure out how to include an age filter in online play. My sessions were ruined by a bunch of kids cussing and acting like little hellions. Kids are one of the many reasons I really can’t stand Halo. This hasn’t been a problem with COD 4, hopefully it won’t be when this is officially released. You can mute players. Beyond the kid factor, I would say World at War is on par with COD 3 and not a leap forward like COD 4. It’s not the step back that many feared, but it’s not a radical step forward. This is a maintenance release. Keep in mind this is a beta and won’t be able to have a verdict until I see the final retail copy and get my hands on the single player campaign. The game will hit the streets Nov. 11.