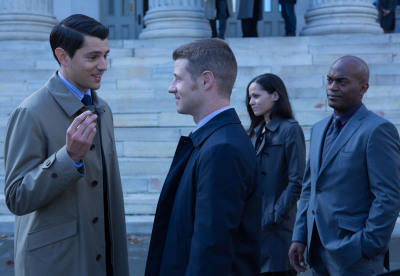 The episode opens with Jim taking Cat to his apartment, he’s surprised Barbara is nowhere to be found. She leaves him a note saying she’s scared of Falcone and Zsas. Cat says more in the first minute then in the entire season. Cat is impressed with Gordon’s sweet, sweet pad. She asks if he’s some sort of rich cop. Gordon is not going to hold Cat against her will – in Juvie, handcuffs, etc. because she’ll just break out. 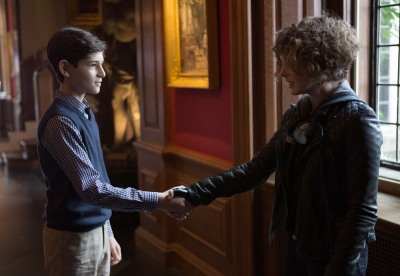 Gordon takes Cat to stay at Wayne Manor. I really love the relationship they are building between Cat, Gordon and Bruce. Man, I wish they’d bring this to the comics and make it canon. Bruce and Selina have a thing in various iterations, this early childhood twist on that canon theme is pretty cool. Alfred, of course, is totally against Cat staying at the house, but Bruce puts his foot down. There’s an instant chemistry when they meet.

The GCPD has a new prisoner, a bomb maker named Ian Harper. Someone busts the bomb maker out of the transit van. All of this before the opening credits. This is a promising start. 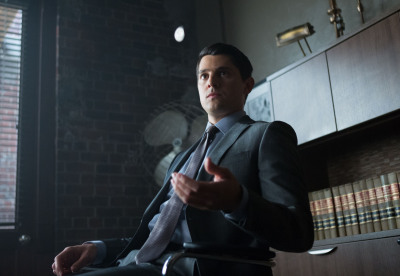 Harvey Dent is talking to some kid and flips a coin to determine the kid’s fate – jail or freedom. He shows Gordon his two headed coin saying kids almost always pick heads. Dick Lovecraft is Billionaire who Dent believes was involved in the Wayne murders. He wants to leak the idea that there is a secret witness to the murders to start rattling people’s cages. Gordon reluctantly agrees – as long as no names are used in the story. I’m pretty sure Gordon wasn’t dumb enough to name his witness, so his emphasis on no names seems pretty pointless. 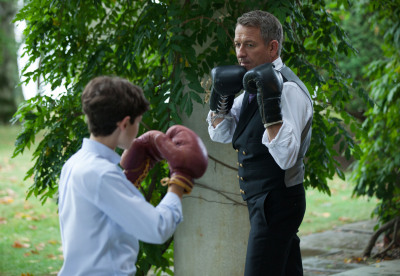 Bruce starts his fighting lessons with Alfred. Cat watches them and tells him she’s hungry and Alfred says she’s not in a bloody hotel.

As much I love Penguin, I’m getting a little tired of him. He’s too much of a super criminal who knows everything. They need to have at least one episode where he gets knocked down a peg or two. He shows up at Liza’s apartment and steals some stuff from her. She’s scared that someone has been in her apartment.

Ian is another one of Gotham’s over the top vigilantes. He blew up munitions factories and didn’t mean to hurt anyone. Ian’s brother claims he’s just misunderstood and need help. Gordon and Bullock wants to know why someone would break him out? He blows up another munitions factory this time killing a several security guards.

Gah, the stuttering of this awful stream is driving me nuts…

Selina tells Bruce his house makes noises at night and Bruce seems excited about the idea of living on the streets. Selina wonders why Bruce is bothering to design his own education when he’s already a billionaire “What’s there to learn?” He says that’s a weird attitude. She gets upset when he starts grilling her about her family.

Oswald confirms that Liza is Fish’s mole by smelling her scent on Fish. He makes another peace offering and tells Fish that reaching out in friendship is never wrong. Gordon and Bullock don’t even need to investigate when Nigma almost always tell them exactly where to find the bad guy. Turns out Ian’s family is being threatened by the men out to get Falcone.

Bruce is embarrassed that Selina saw Bruce do nothing to help his parents. She tells him to stop being dumb, there’s nothing he could have done against a guy with a gun. She then tells him her mother is a famous dancer who is really a secret agent. She then asks Bruce if he ever kissed a girl. Alfred interrupts before anything happens. Is it wrong that I really wanted to see this kiss?

Turns out Fish is behind the Russian mobsters who are hitting Falcone. They are nothing more than hired help.

Bruce is testing his limits by seeing how long he can hold his breath under water. Selina asks him if he expects to get mugged by someone carrying a diving board. She calls him crazy and the strangest kid she’s ever met. He says he’s training himself to be strong which Cat gets but says won’t matter on the streets of Gotham. He has to be ruthless, not strong and learning how to breath under water won’t help him.

Gordon and Bullock track down the Russians and Ian. Butch and Fish double cross them by blowing up the truck full of Falcone’s stolen money and killing all the hired help. The mayor sends all the insane prisoners from Blackgate to Arkham. Gordon is skeptical about the mayor’s motives and doesn’t think it’s a good idea.

Penguin confronts Liza and tells her that he wants her to continue to work for Fish. Bruce and Selina have a food fight and Alfred starts to warm up to her when she sees Bruce actually laughing and being happy for once. He tells Gordon to take his time and that Selina is a troublemaker, but a breath of fresh air. Barbara is shacked up with Montoya – WTH? Where did this come from?

This was a solid episode, I’ll have to watch a non-streamed version to fully appreciate it, but man I love Cat and Bruce together. She’s actually serving as one of his mentors, telling him what the streets of Gotham are really like. Harvey Dent coin flipping his coin all the time is a bit much. We all know his destiny, they could at least tease it a bit.

Once again the procedural of the week was boring and pointless. As I said earlier, I don’t like that the Penguin is becoming darn near “super human,” in his ability to play everyone against each other. I don’t know what they’ll do in later seasons with his character, but his build up should have been slower.

Overall a solid episode due largely to the Bruce/Cat dynamic.

Season Grade So Far – B