Transformers: The Last Night is either action or exposition and on so many fronts it has trouble keeping itself straight – let alone letting the audience do so.

I’m going to be completely upfront here: my inner 12-year old was bored; my outer 65-year couldn’t doze off because the movie was too loud, and I finished my big drink with more than half-an-hour left before the closing credits (and a rather unintriguing tag) began to roll.

The Last Night opens in ‘England – The Dark Ages’ and finds Arthur and his knights about to be removed from the face of the Earth by invading barbarians – while a soused Merlin (Stanley Tucci) seeks aid from (surprise!) an Autobot.

How do we know he’s soused? His first line is, ‘I’m soused!’ (Michael Bay does Monty Python? Really badly?) 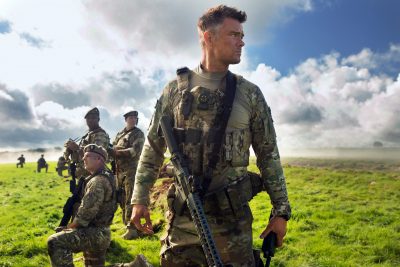 Josh Duhamel as Lennox in TRANSFORMERS: THE LAST KNIGHT, from Paramount Pictures.

Anyroad, there’s an Autobot dragon that saves the day and a talisman that’s given to Merlin to keep safe until it’s needed (the Arthurian myth – only it an Autobot artifact that will return when England/the world needs it most, not Arthur).

In the present, the world has decide Transformers are BAD (Autobots, Decepticons, whatever – they’re all EVIL!)…

So, of course Cade Yeager (Mark Wahlberg) is cleverly hiding all our favorite Autobots in a junkyard – while a 14-year old Latina called Izabella (Isabel Moner) is saving some younger kids from the TRF (who cares, right? They’re apparently bad guys who are willing to kill kids to keep the world safe from Transformers).

Naturally, Izabella is going to wind up at Cade’s junkyard – where the only other human being is Jimmy (Jerrod Carmichael), a young black man who cannot shut the frak up for a minute and is allegedly ‘comic relief’ (only unfunny…).

Somehow, this all ties into Sir Edmund Burton (Anthony Hopkins in a payroll part), the twelfth Earl of *cough* in Merrie Olde Englande – whose one task in life is to save the world by finding Merlin’s last descendant to find and use Merlin’s staff (that Autobot artifact I mentioned earlier) to stop Cybertron from destroying the Earth (which is actually Unicron).

Sir Edmund is aided by Cogman (voiced by Jim Carter) – think a four-foot, sociopathic C3PO – one of a series of older Autobots that includes a past life of Bumblebee called CB7 (orsomething like that) that fought in WWI.

Oh, and Optimus Prime (voiced by Peter Cullen) has been brainwashed by his creator (Quintessa, voiced by Gemma Chan of Humans) into thinking Earth… er, Unicron must die to enable Cybertron to live – and Merlin’s staff will help them do that. 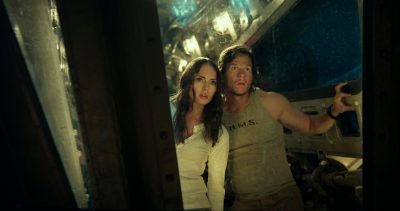 Left to right: Laura Haddock as Viviane Wembly and Mark Wahlberg as Cade Yeager in TRANSFORMERS: THE LAST KNIGHT, from Paramount Pictures.

Then there’s the secret military group that employs soldiers who fought Megatron with the Autobots (gotta get Josh Duhamel’s Col. Lennox into the story somehow) and has placed Lennox, undercover, in the TRF forces.

Which brings us to Merlin’s last descendant, Dr. Vivian Wembley (Laura Haddock, Da Vinci’s Demon) – an upper crust woman with a number of doctorates and polo player. And projected love interest for Cade.

All of whom/which are crammed into a very busy two-and-a-half hours that manage to be loud and obnoxious and incoherent and tedious, simultaneously – except a frustrated physicist (Tony Hale) who is exasperated by having to dumb down his science for the people who compose the leaders of the world, so that they can decide whether or not to do what he suggests.

Left to right: Megatron and Josh Duhamel as Lennox in TRANSFORMERS: THE LAST KNIGHT, from Paramount Pictures.

Hale – and the fact that Wahlberg commits to his role with the single-minded dedication you get from Tom Cruise – save Transformers: The Last Knight from getting an F. Barely.

Transformers: The Last Knight is a lot of sound and fury spread over so many plot arcs that said plot is hammered into insensibility. Old Autobots, new Autobots; old Decepticons, new Decepticons; Transformer dragons – they all look great but have the substance of a Kleenex (and not the ultra-soft triple ply kind).

Michael Bay directs with great energy but virtually no focus. The human cast gets points for showing up and trying, but they are lost in maelstrom of insipidness.

The film will probably make a billion dollars, but it took two-and-a-half hours of my life that I’d really like back. (On the upside, Bay promised that this was his last Transformers film as director!)