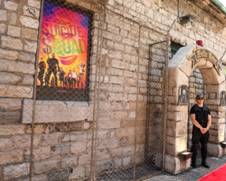 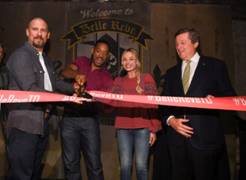 For two days, the city of Toronto will be home to Belle Reve Penitentiary – home of the members of the Suicide Squad!

The showstopper activation has to be the Harley Quinn Smash Cell.

Open from 1-10pm, July 27th and 28th, fans will enter through the prison gates to explore this special immersive experience. Plus, fans can purchase advance tickets to see the film in IMAX® – and have the opportunity to win prizes.

Yesterday afternoon, a one-of-a-kind immersive exhibit showcasing film sets , props and enticing activations opened up for a two-day viewing as a gesture to Torontonians for their excitement shown during filming last year.

Located in the historic Distillery District, the Fermenting Cellar has been completely transformed into the iconic Belle Reve Penitentiary.

The show stopper activation is the world’s first “Harley Quinn Smash Cell” presented in collaboration with Battle Sports-home of the Rage Room and Archery Dodgeball. Fans now have the chance to “feel good being bad” by strapping on a safety suit, grabbing Harley’s bat and letting it all out on glass vases and bottles.

Fans can purchase advance tickets to see the film in IMAX® and have the chance to win exciting prizes by uploading highlights of their visit using the hashtag #BelleReveTO.

A special social media contest was layered into the opening ceremony on the Warner Bros. Canada channels offering Torontonians the chance to win passes to a special advance screening of the film. This cinematic, immersive exhibit is sponsored by Audi Canada, IMAX®, Cineplex, Battle Sports Inc and Edge 102fm and was created by Producer Jonny Pottins.

About Battle Sports Inc:
“We are a Toronto-based recreational facility that caters to adventure-seeking individuals who want to experience a new age of
competitive battle sports, including Rage Room, Dart of War, and Archery Dodgeball. Come check us out at battlesports.ca!”