Entertainment News for The Rest of Us
Lora Bofill
Comic-Con

It was that time of year again where all the hotels sell out in San Diego, and the people who got the oh-so-coveted tickets don their best superhero costume and wait in line to get the juiciest tidbits of their favorite show.  If you were driving by the San Diego convention center and you saw Spiderman, the Predator, orange hairy thing, and Sailor Moon wannabees all walking alongside people carrying Walking Dead back packs, then you were in the right place.  And if you have Kevin Smith broadcasting interviews from a yacht for Comic-Con, you know it’s not just comic books anymore. Hollywood star power is on the way.  Welcome to the 49th annual San Diego Comic-Con International convention!

This year’s Comic-Con started July 20 and ended July 24.  As eager attendees flashed their badges to enter the hallowed convention center, they were able to grab a backpack to carry their Comic-Con souvenir book and a quick guide to the convention.

The convention started out with Preview Night on July 20. There were sneak peek pilot screenings for such shows as Riverdale, Powerless, People of Earth, Frequency, Time After Time, and Teen Titans Go! to name a few.  The highlight of the night was the premiere of Star Trek Beyond which included a Q&A hosted by Conan O’Brien, fireworks, and tributes to the late Leonard Nimoy and Anton Yeltsin.

As you open up the guide to plan out your daily activities, you realize it will be no easy feat as you look at the schedule. 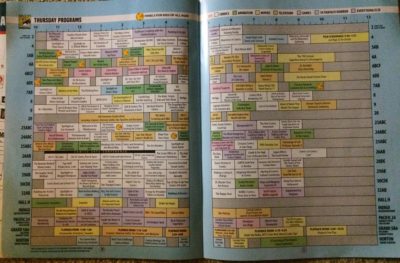 Your guide reveals the exhibit hall featuring the artists alley, booths for autograph signings, and other fun activities. You better bring your walking shoes!

When you enter the exhibit hall, you browse through the many booths at Artist Alley.  You marvel at the artistry of these fantastic artists until you look at your watch and realize you still have a lot of panels to attend! 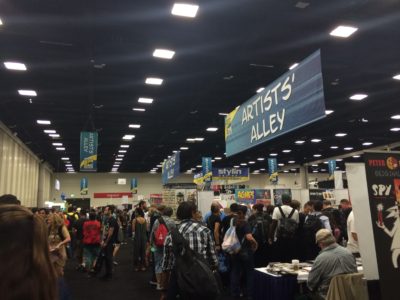 The next few days were filled with waiting in line to see a panel of your favorite actors accompanied by the writers, directors, and producers talk about their tv show.  You get the scoop straight from the mouths of those who write, direct, produce and act the show.  Well, you and several thousand other people who managed to get in the room.

Is it really the last season for the Salvatore brothers in The Vampire Diaries?! (Paul Wesley, Ian Somerhalder)

Hollywood was certainly solidifying its’ hold on Comic-Con. Major networks were seen touting adventure games and activities throughout the exhibit hall and outside the convention center.

Let’s not forget independent film. With the annual Comic Con International Independent Film Festival, it proves that indy film will always be a huge part of the movie industry.  Some of the many films represented at Comic Con included Rogue Warrior: Robot Fighter and Space Command. Both had amazing trailers and special effects. They are not imitations of Star Wars or Star Trek, but an entity of their own.  Rogue Warrior:  Robot fighter had a booth where director Neil Johnson, actress Tracey Birdsall and Marilyn Ghiglioti greeted fans. In another booth, Space Command directed by Marc Zicree with cast Doug Jones, Ethan McDowell, Bryan McClure, Justin Sorvillo, Jelena Mrdja, Aaron Gaffey, and Elle Sonnet signed autographs.  Music composer/producer David Raiklen and David Bartlett were also there to round out the Space Command crew.

In addition to film and television, the list of animated films were endless.  Anime fans were treated to screenings throughout the week. 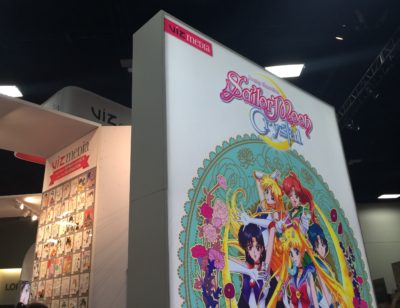 Comic-Con is known for its cosplay and costumes.  Ghostbuster costumes were expected along with the usual Spiderman, Batman, anime goddesses, Star Wars, Star Trek, Disney characters, DC & Marvels comic book heroes, and pretty much anything else is fair game.  Orange hairy thing is still one of my favorites.  Too bad I don’t have a picture.

Of course you can’t leave Comic-Con without a little souvenir.  Pikachus! Did Pokemon Go lead you here? Grab a souvenir and run to listen to Pokemon Go creator John Hanke talk about the popular game that has people running around looking for virtual creatures. 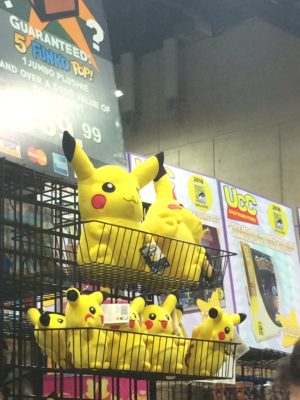 As you are running toward the exit, you see Stan Lee signing autographs.  You push your way through hoards of people and an SDCC staff telling you to stop hogging up the area with your picture taking of Stan Lee. 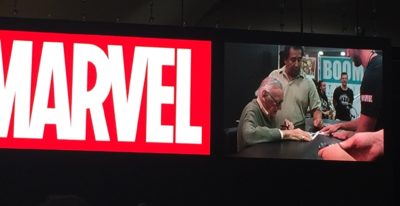 Then you pass by the Star Wars booth and see that cute outfit you’ve always wanted to use for Halloween.  Another swipe of the credit card, and . . . 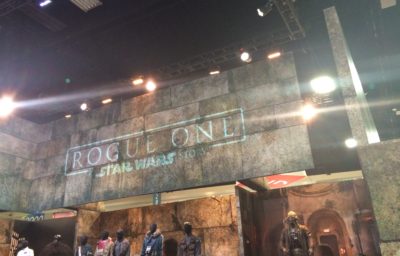 Wait!  Aren’t comic books the life and soul of what started Comic Con?  There are comic books.  And lots of them.   Another swipe of the credit card. 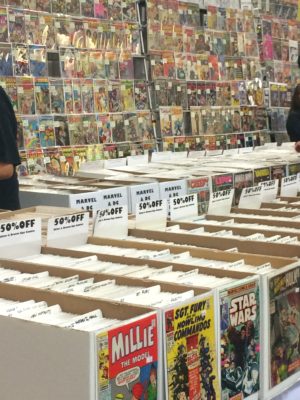 What a fun filled five days! But all good things must come to an end.  You walk toward your car, weary but full of memories and souvenirs, and new found knowledge of the latest with your television shows and upcoming movies.  Yet you can’t help but think–when is next year’s Comic-Con?!

Check back frequently on our site and the Eclipse Magazine youtube channel.  All the juicy interviews from behind the scenes at the Comic-Con press room for shows such as Grimm, Marvel’s Agents of SHIELD, The Vampire Diaries, The Originals, The 100, Once Upon A Time, Archer, Dead Rising: Endgame, Batman: Killing Joke, and more will be featured.

And if you want to start booking your hotel room for next year’s Comic-Con (and believe me people already started booking), it will be July 20-23, 2017.  Until then, live long and prosper.