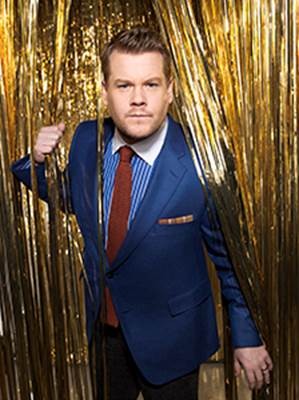 CBS announced today that Tony Award winner James Corden, host of THE LATE LATE SHOW with JAMES CORDEN, will host THE 70TH ANNUAL TONY® AWARDS, live from the Beacon Theatre in New York City, Sunday, June 12 (8:00-11:00 PM, live ET/delayed PT) on the CBS Television Network. This will be Corden’s first time hosting the Tonys. He won the Tony Award for Best Performance by a Leading Actor in a Play for his performance in “One Man, Two Guvnors” in 2012.

“I’m absolutely thrilled to be hosting the Tony Awards,” said James Corden. “Both times I’ve worked on Broadway have been amongst the happiest times of my professional life. I consider it a huge honor to be asked to host such an incredible night. It’s gonna be fun, I can’t wait to dust off my tap shoes!”

“We are thrilled to have James Corden not only as a member of the CBS family, but as host of this year’s Tony Awards,” said Jack Sussman, Executive Vice President, Specials, Music and Live Events, CBS Entertainment. “James is the ultimate performer – actor, singer and comedian – and the perfect choice to host this prestigious and always entertaining live television event.”

“James is one of those rare performers whose gifts translate perfectly to both the Broadway stage and the television screen, making him the ideal choice to host the Tony Awards. The last time he was at the Tonys, he went home with one.  We think he’ll have even more fun as host.  This is going to be one unforgettable show,” said Charlotte St. Martin, President of The Broadway League, and Heather Hitchens, President of the American Theatre Wing.

James Corden is a multi-faceted performer, host, writer and producer with accomplishments that span television, theater, film and comedy. He took the reins of THE LATE LATE SHOW on March 23, 2015, and has quickly become known for generating buzzworthy viral videos, such as Carpool Karaoke, garnering more than 500 million views and 2.8 million subscribers for the show’s YouTube channel. Since Corden took the helm, THE LATE LATE SHOW has consistently been the most social talk show in its time period according to Nielson Social.

Corden came to American late night television with a growing list of award-winning and critically acclaimed credits. He is a Tony Award-winning performer on Broadway, a BAFTA-winning star of a UK television series, a feature film actor, and an acclaimed host, writer and producer in several genres of television. Corden hosts the BAFTA Award-winning UK sports-themed comedy game show “A League of Their Own” on Sky 1 and starred in, produced and wrote the BAFTA nominated comedy thriller “The Wrong Mans,” which is available on Hulu and airs on the BBC. Also, he appeared in the BBC television movie “Esio Trot,” alongside Dustin Hoffman and Dame Judi Dench. Outside of his native England, Corden attracted international attention as the lead in the hit comedic play “One Man, Two Guvnors,” performing first in the National Theatre and the West End in London and then on Broadway, which earned him the 2012 Tony Award for Best Leading Actor in a Play. His additional theater credits include the worldwide tour of “The History Boys” in the role of Timms, which he also played in the feature film adaptation.

On television, Corden starred as Smithy in the critically acclaimed BBC comedy series “Gavin and Stacey,” which he co-created and co-wrote. Prior to that, Corden starred in the British television series “Fat Friends” from 2000 to 2005. In 2011, Corden had a recurring role in the popular BBC science fiction series “Doctor Who” as Craig Owens, the Doctor’s roommate. In addition, Corden hosted the Brit Awards, the biggest event in the British music industry, from 2010 to 2014. Corden starred opposite Meryl Streep, Johnny Depp and Emily Blunt in the Golden Globe Award nominated feature film “Into the Woods.” His additional film credits include “Begin Again,” with Keira Knightley and Mark Ruffalo; “How to Lose Friends and Alienate People,” with Jeff Bridges; “Gulliver’s Travels,” with Jack Black; and “The Three Musketeers,” with Orlando Bloom.

This year marks the 70th anniversary of the TONY Awards, which were first held on April 6, 1947 at the Waldorf Astoria’s Grand Ballroom. The ceremony is presented by Tony Award Productions, which is a joint venture of the Broadway League and the American Theatre Wing, which founded the Tonys.

The nominations for the 2016 TONY Awards will be announced live from The Paramount Hotel on May 3.

Ricky Kirshner and Glenn Weiss of White Cherry Entertainment will return as executive producers.  Weiss will also serve as director for the 17th consecutive year.

Photos are available at www.cbspressexpress.com