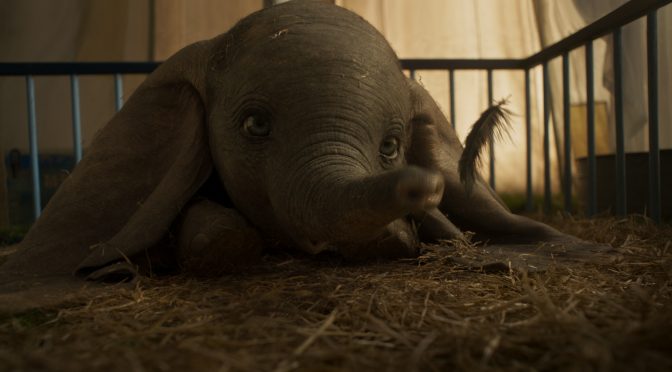 Tim Burton’s Dumbo is almost twice as long – and less than half as much fun.

The original Dumbo was a heartfelt story about a big-eared baby elephant and his mother – and the mouse that helped get them back together after she was sold by the circus where they performed.

It was short, sweet in the best possible ways, and a bit daring (the hallucinatory pink elephants sequence is a classic that rivals anything in Fantasia).

Tim Burton’s Dumbo, on the other hand, has added to the expected rundown circus an impresario whose Coney Island Dreamland is a kind of bargain basement Disneyworld but exotic and posh compared to that circus.

That circus is The Medici Brothers’ Circus – a seedy little enterprise that has suffered while its star attraction, Holt Farrier (Colin Farrell), was away fighting in WWI.

Run by Max Medici (Danny DeVito) – a con artist with a heart of something approaching gold – the troupe features acts like Rongo the Strongo (Deobio Oparei), the strongman who is also the circus’ accountant and publicist; Miss Atlantis (Sharon Rooney), who combines aspects of two kinds of circus freaks – the fat lady and the mermaid, and an assortment of clowns, contortionists and so on (to Burton’s credit, actual circus performers were hired to play them).

Holt returns to circus minus an arm and, the film seems to suggest, with a case of PTSD – to find that his wife, and partner in his act, has died. His two children – Milly (Nico Parker) and Joe (Finley Hobbins) – are appalled, of course, but despite their love for him, he can’t connect with them.

Then a miracle happens – the circus’ most recent addition – an Asian elephant called Mrs. Jumbo, has a baby.

The baby is at first viewed as a freak because of his huge ears – which causes Medici to sell Mrs. Jumbo back to her original owner, but an accidental sneeze shows the children that he can fly.

It takes a while for the adults to be convinced, but when they do, Dumbo becomes a hit.

Vandevere appears to be the circus’ benefactor, persuading Medici to join him in a partnership and moving his base to Vandevere’s Dreamland on Coney Island.

In an arc that is just about the film’s only saving grace, Colette becomes attached to Milly and Joe – and Dumbo. When it turns out that Vandevere isn’t what he seems, she sides with the children and Dumbo.

Dumbo is much darker in tone than the trailers would suggest – scary animals and weird shadows; fires that endanger Dumbo, Colette, circus and Dreamland patrons; Vandevere’s casual order to kill Mrs. Jumbo; the death of a Medici Circus roustabout as a result of a fire he starts…

This is not a film a preschooler should be seeing – and given that the characters (except for the elephants) are barely half-drawn (and only Eva Green seems to elevate her character), there’s not really much on offer for adults, either.

The children are especially wooden. One can’t help but think that this was how they were directed – certainly Burton would have seen how bad they were when he went over the dailies if they weren’t.

Thanks to some wizardly CGI, though, Mrs. Jumbo and baby Dumbo come across as intelligent, caring, and delightful characters – and in those few brief moments when Dumbo soars, the film works.

There’s also a scene that recalls the original’s pink elephants sequence and is a momentary burst of elegance.

Overall, though, Tim Burton’s Dumbo is too long, too short and has too many half-drawn characters.