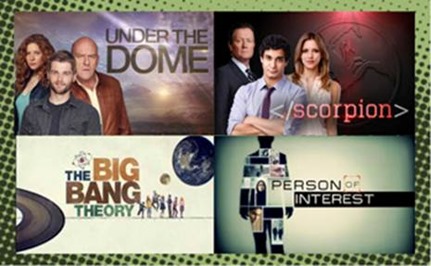 CBS is taking four shows – hits Under the Dome, Person of Interest and The Big Bang Theory; and the new thriller Scorpion – to Comic-Con 2014.

Under the Dome will figure in the Con beyond its panel and exclusive sneak peek – CBS will be offering fans free rides in Under the Dome Pedi-Cabs; The Big Bang Theory brings back its popular Writers’ Room panel for a look at its new season; and Person of Interest will present a special video presentation and Q&A – as it tackles a season in which there are now two operational Machines.

Scropion, though, gets a world premiere screening and panel to introduce the fast-paced, nerds-save-America thriller and branded giveaways that include exclusive, superhero-inspired art.

For a complete schedule of CBS events and tie-ins, follow the jump.

CBS Offers Fans Free Rides in Domed UNDER THE DOME Pedi-Cabs And Partners with Nerdist on a SCORPION-Themed Tent at Petco Park, Featuring a Candy Kiosk and SCORPION-Branded Giveaways With Exclusive Superhero-Inspired Art

CBS’s popular series THE BIG BANG THEORY, PERSON OF INTEREST and UNDER THE DOME return to Comic-Con® with highly anticipated panel events, and the Network’s high-octane new fall series SCORPION makes its Comic-Con debut with a world premiere screening/panel session.

CBS will offer fans free rides in special, domed UNDER THE DOME pedi-cabs and is partnering with Nerdist to present a SCORPION-themed tent at Petco Park, featuring a candy kiosk and SCORPION giveaways branded with exclusive superhero-inspired art of the series’ characters. Additionally, CBS Interactive will provide fans with its annual on-site coverage via CBS.com and GameSpot.com. 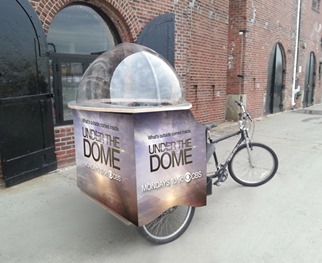 DETAILS ON PANELS/SCREENINGS (in chronological order):

UNDER THE DOME (Presented by CBS Television Studios)

11:15 AM – 12:00 PM Panel & Exclusive Sneak Preview – The hit summer series is back for its second season, with higher stakes and catastrophic developments that leave no one safe under the dome. The inhabitants of Chester’s Mill must decide who to rally behind as Big Jim continues to fight for the town’s trust and allegiance, while resources dwindle and the post-apocalyptic conditions continue to intensify. There are new faces, bigger mysteries, betrayed alliances and monumental revelations about the dome, which will lead to a shocking discovery of what is behind it. Follow us on this journey back under the dome, where you can’t always believe what you see and nothing is impossible. An exclusive sneak preview at what’s to come in Season Two will be followed by a panel discussion with cast members Mike Vogel, Dean Norris, Rachelle Lefevre, Alexander Koch, Colin Ford and Eddie Cahill with Executive Producer Neal Baer. The panel discussion will be moderated by Kevin Frazier (@KevinFrazier), co-host of THE INSIDER.

From CBS Television Studios in association with Amblin Television, UNDER THE DOME is broadcast Mondays at 10:00 PM throughout the summer.

12:05 PM – 1:10 PM Exclusive Premiere Screening & Panel – Discover the new CBS drama coming this fall, based on the true story of Walter O’Brien, an eccentric genius with the world’s fourth-highest I.Q. and the creator of a company of brilliant misfits who use their mental muscle to defend the planet against complex high-tech threats of the modern age. In this high-octane thrill ride from the makers of “Star Trek,” “Transformers,” “The Amazing Spider-Man 2” and “The Fast and The Furious,” O’Brien’s team uses their exceptional brainpower to solve the nation’s crises, while also helping each other learn how to fit in. The exclusive screening of the pilot episode will be followed by a panel discussion with the real-life Walter O’Brien and series stars Elyes Gabel (“World War Z”), Robert Patrick (“Terminator 2”), Katharine McPhee (“Smash”) and Executive Producers Nick Santora, Nicholas Wootton, Alex Kurtzman, Roberto Orci and Justin Lin. The panel discussion will be moderated by Sandra Gonzalez (@theSandraG), Senior Television Reporter at Mashable.com.

10:00 AM – 11:00 AM Inside THE BIG BANG THEORY Writers’ Room – Back by popular demand! THE BIG BANG THEORY writers are back in San Diego and ready to share secrets behind TV’s #1 comedy, which is coming off its most climactic season yet (a first kiss! an engagement! Professor Proton became one with The Force!). Come to the panel to uncover writers’ room mysteries and learn how intimidating it was to write for Darth Vader. (Answer: Very.) The hit show’s executive producers and writers take the stage for a lively discussion to discuss the creative process. The panel will be moderated by Craig Ferguson (@CraigyFerg), host of CBS’s THE LATE LATE SHOW.

From Chuck Lorre Productions, Inc. in association with Warner Bros. Television, THE BIG BANG THEORY returns for Season 8 on Monday, Sept. 22, airing Mondays at 8:00 PM before returning to its Thursday 8:00 PM time period on Oct. 30.

For the latest updates on THE BIG BANG THEORY, go to www.facebook.com/TheBigBangTheory and follow @BigBang_CBS and executive producers Steven Molaro (@SteveMolaro) and Bill Prady (@billprady) on Twitter.

For additional info on Warner Bros. Television’s plans for Comic-Con and for real-time updates during the convention, please follow @warnerbrostv on Twitter (hashtag #WBSDCC) and visit http://comiccon.thewb.com.

6:15 PM – 7:00 PM PERSON OF INTEREST Special Video Presentation and Q&A – Hit drama PERSON OF INTEREST returns to San Diego for the fourth year! Join executive producer Greg Plageman along with series stars for a special video presentation and Q&A. Join the discussion as the science “fiction” of PERSON OF INTEREST stays one step ahead of real-world events.  The thrilling finale left us with a second machine – Samaritan – now online, making the elusive team targets themselves, hiding in plain sight. The only thing more frightening than the ruthless Decima organization calling the shots is leaving those decisions up to an untested Machine. Facing a dangerous tomorrow, the POI team must find a way to outsmart Samaritan, the all-seeing, all-powerful artificial intelligence that’s self-governing, continually evolving and growing stronger every day.

From Bonanza Productions Inc. in association with Bad Robot Productions and Warner Bros. Television, PERSON OF INTEREST returns for its fourth season on Tuesday, Sept. 23 at 10:00 PM.

The PERSON OF INTEREST signing will be held at the Warner Bros. booth, #4545. Signing time to be announced.

For the latest updates on PERSON OF INTEREST, go to www.facebook.com/PersonofInterestCBS and follow @PersonInterest and @bad_robot on Twitter.

For additional info on Warner Bros. Television’s plans for Comic-Con and for real-time updates during the convention, please follow @warnerbrostv on Twitter (hashtag #WBSDCC) and visit http://comiccon.thewb.com.

CBS and Nerdist are teaming up to present a SCORPION-themed tent at Nerdist headquarters in Petco Park (100 Park Blvd., San Diego, 92101) to introduce Comic-con attendees to the Network’s new fall Monday night series. From 11:00 AM to 5:00 PM on Thursday, July 24, fans can satisfy their sweet tooth cravings at the tent’s candy kiosk, check out trailers of the high-octane series and obtain SCORPION giveaways branded with exclusive super hero-inspired art of the SCORPION characters (art designed by Ty Mattson will make its debut at Comic-con). The SCORPION swag will include trading cards, posters and more.  Additionally, SCORPION cast members will make an appearance at the tent following their panel.

Also, from Thursday, July 24 through Friday, July 25, fans can score a free ride to their next local destination in special, domed pedi-cabs, designed as an homage to the Network’s sophomore summer series UNDER THE DOME.

CBS.com – CBS.com will offer a window into CBS events, news and action at Comic-Con for fans throughout the country. Coverage will include interviews with CBS stars in attendance as well as on-demand video coverage of the CBS series’ panels and photos from key Comic-Con and CBS events. In addition to CBS.com, fans can get real-time updates through attending CBS series’ Twitter accounts (@CBSatComicCon, @CBS, @UndertheDomeCBS, @Scorpion_CBS, @PersonInterest, and @BigBang_CBS) and on CBS’ Facebook page. Social coverage will include live tweeting of panels and events, plus immediate access to photos and videos.

GameSpot – GameSpot.com’s expert editors will be on the scene to cover the biggest gaming news and announcements in a daily web show from Thursday, July 24 through Saturday, July 26.  The show will be streamed and will transport its viewers to San Diego for hands-on demos of all the highly anticipated games being previewed at Comic-Con.