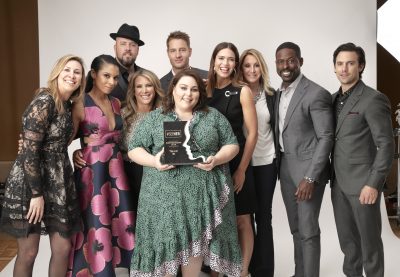 NBC”s family drama This Is Us has won the inaugural #SeeHer Award from the Association of National Advertisers (ANA).

The new annual award is given to primetime programming that pushes boundaries on changing stereotypes and recognizes the importance of women and girls in media.

(New York, NY– June 4, 2018) – Today, the Association of National Advertisers (ANA), the largest marketing and advertising association in the United States, announced that it has presented its first #SeeHer programming award to the hit NBC family drama This Is Us. The award, to be given out annually, honors primetime programming that pushes boundaries on changing stereotypes and recognizes the importance of women and girls in media.

Led by the ANA, the #SeeHer mission is to accurately portray all women and girls in media so that by 2020 — the 100th anniversary of women gaining the right to vote—they will see themselves reflected as they truly are. #SeeHer has been recognized as the nation’s most influential voice for gender equality in programming, advertising, marketing and media. It now includes more than 60 of the nation’s leading marketers, representing more than 1,000 brands with a combined $50-billion in U.S. ad spend. The movement also has forged deep partnerships with showrunners, broadcast and cable networks and talent agencies.

A particularly powerful SeeHer innovation is a data-driven research tool called the Gender Equality MeasureTM (GEMTM) that identifies unconscious bias in shows and ads. GEM™ measures perceptions of how female actors are portrayed in the media by asking consumers key characteristics about gender.

This Is Us, created by Dan Fogelman and produced by 20th Century Fox Television, scored the highest GEMTM score of primetime broadcast programming for the 2017-18 viewing season.

“As evidenced by our successful kickoff Olympics partnership, and now with top programs such as “This Is Us,” NBCUniversal has enthusiastically made a full portfolio commitment to #SeeHer,” said Linda Yaccarino, Chairman, Advertising and Client Partnerships, NBCUniversal. “By creating opportunities for advertisers to support this movement in our top programs, we’re giving the ultimate platform to promote accurate portrayal of women and girls in all media.”

Everyone has a family. And every family has a story. “This Is Us” chronicles the Pearson family across the decades: from Jack (Milo Ventimiglia) and Rebecca (Mandy Moore) as young parents in the 1980s to their 37-year-old kids Kevin (Justin Hartley), Kate (Chrissy Metz) and Randall (Sterling K. Brown) searching for love and fulfillment in the present day. This grounded, life-affirming dramedy reveals how the tiniest events in our lives impact who we become, and how the connections we share with each other can transcend time, distance and even death. From the writer and directors of “Crazy, Stupid, Love” comes a smart, modern show that will welcome you into a family you feel you’ve known for years.

The #SeeHer Award also recognizes the show for its boundary-breaking highlights behind the camera. Fogelman, whose credits include whose credits include films Tangled, Crazy, Stupid Love and Cars, and TV shows The Neighbors, Galavant and Pitch. He intentionally recruited behind-the-scenes talent that reflects the diversity of his cast, including a writer’s room that is 30% African-American. Fogelman’s sister Deborah, whose struggles with weight were one of the inspirations for the show, serves as a consultant.

“NBC and Dan Fogelman have delivered smart, sophisticated storytelling that celebrates life in all of its diversity and complexity,” says #SeeHer chair Stephen Quinn. “This Is Us represents the values and the aspirations of our #SeeHer movement. It is a remarkable achievement, powerful television, the kind of programming that #SeeHer advertisers want to support. We congratulate the talented women and men ‘in front and behind the camera’ that make this such a great show.”

#SeeHer shared the GEMTM module with the industry and it is being used by marketers and agencies to help create and support bias-free storytelling. GEMTM has been incorporated into ad copy testing, media strategy and creative development, and twice a year during sweeps months, GEMTM scores are captured for top-rated Nielsen programs.

About the SeeHer Movement
Despite the strides made to accurately portray women and girls in media, an unconscious bias persists against women and girls in advertising, media, and programming. The Association of National Advertisers (ANA) Alliance for Family Entertainment (AFE) launched the SeeHer movement in June 2016, after the Obama administration announced the elimination of gender bias in media as critical to the nation’s future. SeeHer’s mission is to increase accurate portray women and girls in media 20% by 2020, the 100th anniversary of women winning the right to vote in the U.S. It has awarded #SeeHer awards to Viola Davis and Gal Gadot for their powerful roles. For more information, visit www.SeeHer.com, and follow us on Facebook, Instagram, and Twitter.

About the Association of National Advertisers (ANA)
The ANA (Association of National Advertisers) makes a difference for individuals, brands, and the industry by driving growth, advancing the interests of marketers, and promoting and protecting the well-being of the marketing community. Founded in 1910, the ANA provides leadership that advances marketing excellence and shapes the future of the industry. The ANA’s membership includes more than 1,000 companies with 15,000 brands that collectively spend or support more than $400 billion in marketing and advertising annually. The membership is comprised of more than 750 client-side marketers and 300 associate members, which includes leading agencies, law firms, suppliers, consultants, and vendors. Further enriching the ecosystem is the work of the nonprofit ANA Advertising Educational Foundation (AEF), which has the mission of enhancing the understanding of advertising and marketing within the academic and marketing communities. For more information, visit www.ana.net, follow us on Twitter, Instagram, or join us on Facebook.